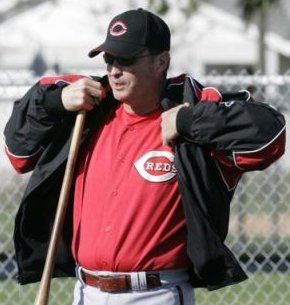 Williams to Start Against Kia; Harang Against Cubs

Tomorrow is the first exhibition game of the 2006 spring training against the Kia Tigers. Per Marc, our exciting line-up is going to be:

Meanwhile, it looks like Aaron Harang is currently in line to be our opening day starter.

Tentatively, Harang's first exhibition start will be March 4 against the Yankees at Tampa. If given the expected four days rest between starts all month, it would put the right-hander perfectly in line to pitch the April 3 regular-season opener against the Cubs at Great American Ball Park.

Posted in Random Ramblings.
Comments Off on Williams to Start Against Kia; Harang Against Cubs

Still Waiting for the Chat Room to Load

The chat with Wayne Krivsky this afternoon got over 100 attendees at one point. Of course, that probably doesn't count all the people who, like me, spent their whole lunch hour staring at this screen.

I can only assume this had something to do with my company's firewall, Internet access privileges, or other security features. Nice of the applet not to mention that anything was wrong, though.

If it's someone good chatting next Monday, I guess I'll just have to quit my job. Or call in sick.

UPDATE: Duh, I forgot to link to the chat log.

UPDATEx2: Next week will be Mr. Adam Dunn. I think I'm getting feverish already.