The Reds triumphed over the Phillies in Sarasota today, 5 to 2. Brandon Claussen finally got his first start of the spring training season and, in addition to allowing no runs on just three hits and a walk in three innings of work, also knocked in a couple runs with a double in the second inning.

Some fella by the name of Earl Snyder who, according to his bio plays first base but according to the box score was playing third, hit a two-run home run in the eighth. Oh, and Tony Womack was caught stealing again. Maybe he's not as fast as he thinks he is.

Tomorrow the Reds travel to Dunedin to play the Toronto Blue Jays at 1:05 p.m.

So, yesterday I was looking to expand my horizons a little bit. Smack talking with bellyscratcher about those unfortunate St. Louis Cardinals has provided me great fun, a great reason to learn up on the Cards, and a great friend. I thought it couldn't do any harm to head over to Cubs-land and see how they responded to a little innocent jabbing.

No kidding, all I said on Goat Riders of the Apocolypse was:

What a coincidence: the Reds' backup catcher is a Latino Lover, too. More specifically, a Latin Love Machine.

I'm concerned about Prior. If he doesn't start the second game, whom will the Reds beat up on?

And that apparently garnered FOUR paragraphs dedicated to me in today's post:

Yesterday in the comments section, someone by the name of Red Hot Mama decided it was an appropriate time to lay down the smack, dissing the Cubs in favor of her beloved Reds team. RHM, let me just say this: The Cubs have gone 24-22 against the Reds in the last three years. I have to admit, that's pretty distressing since the Cubs have been way better than the Reds. It's actually kind of heart breaking to see that Chicago only has a two game advantage on Cincinnati in the last few years. True, the Reds sunk the Cubs in 2004, and dealt a few crushing blows in 2005. Actually, that's not fair. The Cubs sunk the Cubs. They just used the Reds-by-proxy.

It may be true that the statistically greatest Cub is a cheat, but the greatest Red isn't even allowed in the ballpark on most days and lived his own personal Brokeback Mountain every day for more than a year in the 90's for tax fraud. Don't get me wrong. The Reds are a good young team, but I wouldn't trust the Reds organization with managing a lemonaid stand, and certainly I wouldn't trust them to manage a baseball team.

Sure, the Reds won a World Series once in my life-time. And they were a tremendous team in the 1970's. They were also owned by a bat-shit crazy elderly woman whose long list of bizarre offenses I won't even mention on this blog. The Cubs also had an incompetent owner for a number of years, but I don't think he was crazy, just stupid about baseball.

In other words RHM, don't give none, won't get none. When the Reds actually compete again, feel free to lay down the smack. Until then, just thank your good graces that Adam Dunn is still a Red, since he is immensely talented.

I think I made a new friend. 🙂 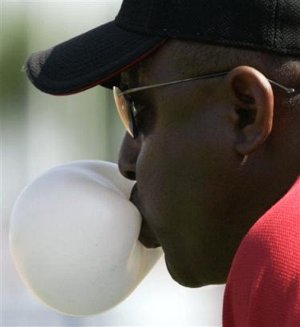 Posted in Pretend Captions.
Comments Off on Don’t Burst His Bubble

Register here to get in on the fun.