The Least Enthusiastic Casey Has Ever Sounded 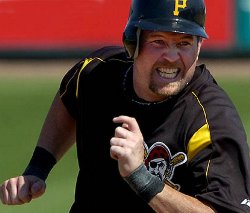 Our good buddy over at Where Have You Gone Andy Van Slyke? wrote up a little piece about a story from the post-gazette.com about Casey's prospects for staying in Pittsburgh when free agency rolls around at the end of the year.

Pat thinks it's premature for the Pirates to be considering extending Casey's contract at this point. I say it's moot. A quote like “I'm going to look at the situation this year and see what it holds,” out of Casey is like…I'm not even sure. I've never heard anything like that out of Casey. It's hardly a ringing endorsement, though.

We all know that Casey's an emotional, sensitive guy. He probably doesn't want to get all attached to his new team when he knows he'll probably have to leave again at the end of the year. Maybe, just maybe, he's even starting to get the germ of an idea in his head about going to a team that's actually going to win next year.

Boy, wouldn't that be a change of pace. Maybe the kind of change that will really get Casey going.

Or maybe he'll be crying his goodbyes to the Pirates next September. At least he can always go back to visit his folks.

3 comments to “The Least Enthusiastic Casey Has Ever Sounded”