The Race for Second Base

Today is Ryan Freel's 30th birthday. In his honor, Red Hot Mama is proud to present The Race for Second Base, a sophisticated computerized simulation of the heated competition to be the Reds' opening day second baseman. Give it a try now to find out how the keystone situation will shake out.

If you haven't made it over to see The Grady's Ladies Sisterhood website, I highly recommend it. It's the kind of effort that I'd like to see for more of our guys. Maybe something like:

If you're a Reds groupies and like the sound of any of those sites, please feel free to run with it. Except for the last one. I might want to hold on to that one.

My crack technical staff is working on something special for the big 3-oh later today, but I wanted to send off a happy birthday wish as soon as it was relevant. 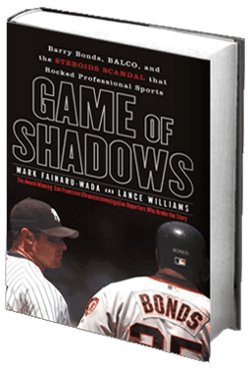 On March 27, the book Game of Shadows, written by San Francisco Chronicle reporters Mark Fainaru-Wada and Lance Williams, will hit the shelves everywhere. The book details the extensive steroid use of slugging superstar Barry Bonds since 1998. An excerpt of the book is available on SI.com and will appear in the March 13 issue of Sports Illustrated to hit shelves tomorrow.

This article from Sports Illustrated about the book already gets into plenty of interesting factoids. Did you know, for example, that Bonds' took a women's fertility medication in an effort to spur his natural hormone production? I don't know that anyone's really surprised to be presented with evidence of Bonds' steroid use, but to have it all laid out in graphic detail is a tad overwhelming. So go read it now!

My thoughts on the matter fall into three categories:

Apparently he already knows how it ends.