The Reds slipped past the Pirates by a score of 2-1 in Bradenton today on the strength of a two-run home run from everyone's favorite Dominican Dynamo, Edwin Encarnación.

Tommy Phelps made the short-notice start in place of the shoulder-inflamed Aaron Harang. Phelps worked three scoreless innings, allowing just two hits. Ben “My Name is Really Fun to Say” Kozlowski also put in a couple scoreless innings. Some other people must have pitched the other 4 innings, but I don't know who they are as the box score persists in not being available from MLB.com.

The big story today of course, is that Sean Casey didn't take a pitch to the head. Wait, no. That drowned out the rest of the game yesterday. Today's big story is little Encarnación hitting his freaking fifth home run in spring training. Jeepers, kid, save some for the regular season.

This game brings the Reds' record to 5-5. Tomorrow the Reds host the Yankees.

The moves for Machado, Herr, and Wathan don't surprise me. Machado lacked scrapitude compared to Ray Olmedo when the two were asked to prepare for the possibility for playing in the outfield last season. I imagine Machado would have really had to demonstrate some serious Veteran Presence and Knowing How to Play the Game if he was going to win Narron over.

As for Herr and Wathan, I'd never heard of them, so I pretty much expected them to end up in the minors.

The fact that Hall was re-assigned when Hudson and Nelson were just let go was a little surprising, but without seeing them for myself, I'm not prepared to say that any of them were the wrong move. It seemed like Hudson wasn't doing so bad this year, but I find I'm kind of relieved that he's moving on. His inconsistency isn't my problem anymore.

Everyone else's inconsistency, on the other hand…

Now to anxiously await the next round of cuts. Four of the seven who have been cut so far have had last names that begin with the letter H (the three mentioned here plus Josh Hancock). Watch your back, Aaron Holbert! 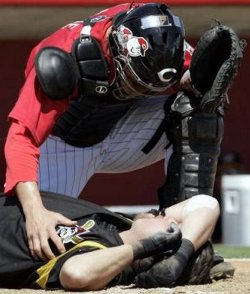 Apparently former Reds are a little hotter than current Reds as the Pirates shut out the home half of the Reds split squad 5-0 yesterday in Sarasota.

Michael Gosling got the start and held the Pirates scoreless through three innings of work. Gosling gave up two hits, a walk, and a big ol' beanball to the side of Sean Casey's head. Gosling was upset about hitting the Mayor, but I'm sure Casey had it coming.

Jacob Cruz did his best to get the hits rolling with a double in the fourth inning. According to the game wrap on the official Reds site, Cruz's hit broke a streak of nine Reds' outs in a row. You might remember that Cruz broke up a 5 2/3-inning no-hitter in Sunday's game against Tampa Bay. He seems to have a gift for that. Too bad both turned out to be losing efforts. Tony Womack contributed half of the Reds' four hits.

The Reds record stands at 4-5.

The full-team Reds face the Pirates in Bradenton today at 1:05 p.m. Projected opening day starter Aaron Harang had been scheduled to start, but has been scratched due to inflammation in his right shoulder. He's currently listed as day-to-day.

The Reds demonstrated that they can consistently beat the Twinkies yesterday with a 3-2 victory in Fort Myers. It wasn't the kind of 9-1 event we saw last time, but it did involve third baseman Edwin Encarnación's fourth home run of the spring training.

Dave Williams got the start and managed to hold the Twins scoreless through his three innings of work. Sure, he walked four guys to get there, but none of them scored so who's complaining. Matt Belisle, Jason Standridge, Luke Hudson, Brian Shackelford, Ryan Wagner, and Allan Simpson each pitched an inning as well. Belisle and Standridge each allowed a run. Wagner got the win and Simpson pulled in his second save of the preseason.

Guy-You've-Never-Heard-Of of the game: Dewayne Wise. He went 3-for-3 with an RBI and a run scored. His timing couldn't be better; the first cuts are coming today.