I've added a new entry to the Felipe Lopez Human League Profile about his collection of tattoos. It's a start, but I'd like to add more specific information, and ideally, pictures. If anyone can contribute details, I'd certainly appreciate anything you can offer. 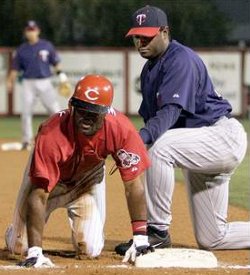 Tony Womack successfully stretches a double into an out during Monday's game against the Twins.

The Reds fell to the Twins last night 10-3 under the lights at Ed Smith stadium in the first night game of spring training.

David Williams is starting to make me doubt the wisdom of the Casey trade. He allowed four runs on six hits through 3 2/3 innings of work. Rick White finished off that last out of the fourth before 19-year old phenom Homer Bailey came in to allow five runs on six hits in 1 2/3 innings of work. To be fair to Bailey, Tony Womack did commit a key error to extend his agony. Recognizing the talent of Bailey was one of the few things the Twins' radio announcers got right about the Reds in their broadcast last night.

Guy-I'd-never-heard-of Brad Salmon finished off the inning for Bailey, clearing the way for Kent Mercker, David Weathers, and Chris Hammond to pitch an inning of relief apiece. Weathers gave up the Twins' tenth run of the night, but I kind of doubt anyone much cared by that point. Mercker continued to look good since his return from that back strain.

It was the guys with something to prove who came through with the RBIs in the eighth inning. Frank Menechino, Earl Snyder, and Brian Buchanan can each claim one of the three runs the Reds scored.

The loss brings the Reds' record to 7-7. Our boys visit Fort Myers this afternoon to take on the Red Sox at 1:05 p.m. Aaron Harang is scheduled to start, so hopefully we'll see that the team was right and the the shoulder inflammation was really not serious and not worthy of an MRI.

Jimmy Journell and Ben Kozlowski join Anderson Machado, Aaron Herr, and Derek Wathan in the category of “reassigned to minor league camp.” I believe this just means that they weren't on the major league roster to begin with, so moving them around was just a matter of telling them where to show up in the morning.

Elizardo Ramirez and Ray Olmedo were on the roster, so sending them to Louisville required an option. I'm going to miss Olmedo, but I think he'll be back. The Lizard scares me a little, but I imagine the Reds can't afford not to give him another chance. Also, Travis Chick, Phil Dumatrait, Miguel Perez, and Joey Votto were optioned to Chattanooga.

Posted in Wheeling and Dealing.
Comments Off on Reds Trim Roster: Part Deux