The Reds fell to the Indians on Tuesday by a score of 2-5 on Bingo Day at Ed Smith Stadium. 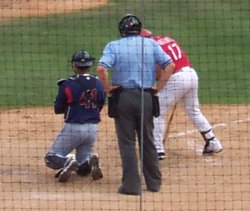 Brandon Claussen started and allowed just one run through five innings. Unfortunately, Jake Robbins came in to give up four runs in the sixth and get the loss.

Edwin Encarnación found a field other than left when he hit a center field double in the 2nd inning. He later scored on an Austin Kearns sacrifice double-play.

Chris Denorfia stole second base in the sixth inning and later scored to give the Reds their other run.

Chris Hammond pitched a scoreless top of the seventh, and it really looked like there was hope for the Reds when Danny Graves came in in the bottom of the seventh. But alas, the longhaired wonder proved to be too much for Dewayne Wise, Frank Menechino, and Jacob Cruz, who went down in order on ground balls. Proof positive that we were wrong to say goodbye to Graves.

The loss brings the Reds’ record to 11-10. The Reds visit the Twins in Fort Myers tonight at 7:05 p.m., and I take the day off. This vacation has been as much work as work is.

Hoping to repeat the rampant success of Danny Graves, the Reds started David Weathers in their win against the Blue Jays on Monday in Sarasota.

Rich Aurilia had a good day with an RBI double in the sixth inning and an impressive heads-up play to throw a guy out at home. Especially encouraging, since he’ll probably be seeing quite a bit of time at first. Ryan Freel also provided an RBI and Brian Buchanan provided two. 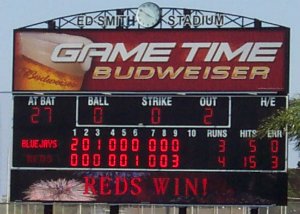 The woman in the row in front of us was selected as the Carraba’s sweetheart of the game, and was presented with flowers and a gift certificate. She had spent most of the game consulting with her mother about the sunburn on her shoulders and reading a celebrity magazine, so she definitely didn’t see it coming, even after they announced her section, row, and seat number. She also narrowly avoided a foul ball a few innings earlier, so it was a big game for her. Too bad there isn't a Jumbo-tron at Ed Smith.

The win brought the Reds' record to 11-9. They would go on to host the Indians on Tuesday afternoon.