Looks like the Latin Love Machine is gonna be our opening day starter at catcher. LaRue apparently tore his meniscus, though it's not entirely clear when he did so. While it seems to be minor surgery right now, knee problems in a catcher are never a good thing. I don't think he'll start the season on the DL if he'll be out for only 4 or 5 games, but this does mean David Ross is almost assured of being on the roster opening day.

In the vein of live blogging, I&apos;m pleased to bring you live podcasting. And thanks to the editing skills of my crack technical staff, the end result is just over 21 minutes instead of over 3 hours.

Pretty much I just recorded my impressions of the game in St. Petersburg against the Tampa Bay Rays as it happened. The recording was done in the iRiver, a portable digital recorder. The quality isn&apos;t quite as high as the real-live microphone back home, but I think it came out pretty well.

Make sure you don&apos;t miss the intro to the program. It is the mystery, super-special event that I wanted to keep a secret on Friday.

So finally you can know what it would be like to sit near the RHM at a baseball game and go forward in life requesting seats as far away from me as possible. I should also mention that there are a couple dirty words in the broadcast, so to all you kids listening: don&apos;t tell your parents where you heard them.

Posted in Podcasts.
Comments Off on Episode 6: Live Podcasting

Just When You Thought It Couldn’t Get More Exciting 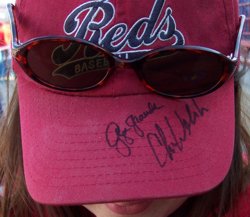 That's right: Chris Welch and George Grande signed my Fox Sports Net hat. I won't pursue any more autographs this spring: after all, how could I ever beat this??

Posted in Spring Training.
Comments Off on Just When You Thought It Couldn’t Get More Exciting 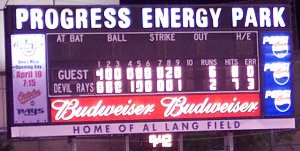 The Reds took down the Tampa Bay Rays 6-2 on Friday at Progress Energy Part in St. Petersburg.

Aaron Harang got the start and allowed one run on four hits through six innings. The single run came on an inside-the-park home run by Carl Crawford in the fourth inning. Mike Burns and Todd Coffey each contributed a scoreless inning. Matt Belisle gave up a run on two hits and two walks in his inning. Maybe it was just that I was so cold and wanted desperately to go home, but it really seemed like a rough ninth for Belisle.

Dewayne Wise sprained his ankle in the second inning when he tripped over second base while stealing. He lay on the ground for what seemed like a long time, pounding the dirt. It wasn't clear whether he was doing it out of pain or frustration at knowing he was just a week away from making the big league roster.

It's going to be a short game wrap for this game, but you can hear about the game in great detail in this week's special edition podcast.

This one is a little trickier. Can you name the Luminous, Lustrous Masterpiece of baseball power based on this (rather digitized) photo? 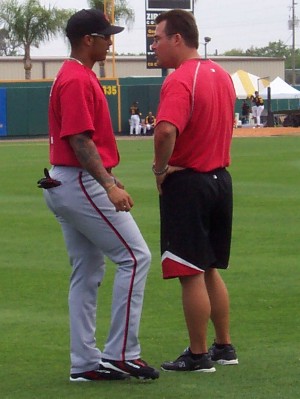 The answer to our last Name That Player photo was, obviously, Felipe Lopez. Congratulations to everyone who guessed right.
Posted in For the Ladies.
Comments Off on Lucky Bat