I Bet He Never Loses His Equipment

If the shoes don't already give this one away, certainly the fact that the ball is not actually inside the glove will. 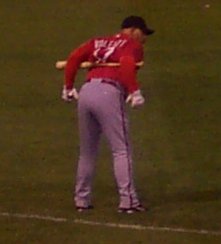 The answer to our last Name That Player photo was the Latin Love Machine himself, Javier Valentín. Congratulations to everyone who guessed right.
Posted in For the Ladies.
1 Comment

The Reds rallied against the Minnesota Twins to win 9-11 in Sarasota on Saturday.

Our newest pitcher, Bronson Arroyo, got the start. Arroyo, who came to the Reds from Boston in exchange for Wily Mo Peña was known by many in the crowd, but not by all. The people in the row behind us were keeping score and seemed to know quite a bit about baseball in general. However, they apparently hadn't heard about the trade and when they saw Arroyo warming up on the field, they didn't know who they were looking at.

Arroyo started off the first inning with a strike, but the inning got a little rockier from there. After Jason Tyner popped out to the shortstop, Luis Rodriguez singled to left field and Jason Kubel doubled off the wall in center. That set up Justin Morneau for an RBI single to left center before the Twins were done with the first.

Third baseman Edwin Encarnación got the run back and then some in the bottom of the first when he knocked in Tony Womack (who had walked!!) and Felipe Lopez (who had singled) on his double of the left field wall. The score was 1-2 in the Reds' favor after 1.

Arroyo struck out two during a 1-2-3 top of the second. In the bottom of the second, e worked a full count before grounding out to third, and let me tell you, that boy can run. Unfortunately, that was the most interesting thing to happen in the Red's half of the second, so the score remained 1-2.

The top of the third was ugly. After a quick ground out to second, our new pitcher walked two. Another another infield out, and he gave up the three-run bomb to Glenn Williams. The people behind us laughed: he's not making the roster this year, they said.

Josh Rabe followed up the home run with a broken bat double down the left field line that Encarnación just stood and watched go by. It wasn't scored an error, but I hope someone gave him a serious talking to about it. Rob Bowen hit an RBI single to center field to bring the score to 5-2 before Jason Bartett hit into a fielder's choice to finally end the pain of the inning.

Neither Encarnación nor anyone else in the bottom of the third was able to do much productive, and the fourth inning was three-up, three-down for both teams. I was investigating the hot dog situation during the fourth inning, but when I returned, by husband told me that there was a bit of a hubbub in our section when someone thought they spotted David Wells walking to the dugout in a Reds uniform. I think it must have been Rick White, but if it was the people behind us who thought they saw it, who knows.

The top of the fifth saw one of those great, right-through-the-legs type errors from Tony Womack that eventually allowed an unearned run to score. Arroyo was pinch hit for in the bottom of the fifth by Javier Valentín. He left the game having allowed six runs (five earned) on seven hits through five innings pitched. He struck out three and walked two.

After Jason LaRue's solo shot to right field, the Reds went down in order to bring the score to 6-3 after five. The top of the sixth saw David Weathers face just three batters. He walked one of them, but the runner was erased on a double play.

The home-running really got started in the top of the fifth. Ken Griffey, Jr. led off the inning with a home run to center field. Encarnación popped out to second to set up Adam Dunn for his own solo shot to right field. The scoreboard said, horrifyingly enough, “That ball is DUNN!” The score was 6-5 after six innings, and I was beginning to entertain the glimmer of a notion that the offense might spare the new guy the loss.

The game was starting to fell remarkably like the regular season games last season. Especially when Kent Mercker came in to walk Matt Tolbert, give up a double to Kubel, and hand over a sacrifice fly to Jason Hart to make the score 7-5.

In the bottom of the seventh, Javy doubled off the wall in center field to set up Womack for the RBI single to right center. And despite the fact that Womack successfully stole second base, Griffey popped out to second to end the seventh inning with a score 7-6.

That old familiar came back in the top of the eight when Chris Hammond took the mound. With one out, Bartett doubled down the right field line, and Luis Maza doubled to left field to bring in a run. Dunn actually dove after Maza's double, but only after he'd already gotten a slow start. Tolbert hit into a fielder's choice to score yet another run before Kubel flied out to center to end the top of the eighth with the score at a disappointing 9-6.

But the Reds weren't done. In the bottom of the eighth, Encarnación walked and Frank Menechino pinch ran for him. Or rather, he pinch jogged when Dunn hit his second home run of the game, this one to center field, to bring the score to 9-8. Hatteberg singled into right field. Kata struck out, but Freel singled to right field and Valentín singled to second to load up the bases. Jacob Cruz field out to left field, but Andy Abad walked to tie up the game. Griffey singled to right center for a couple RBI to give the Reds their first lead since the third inning 9-11.

Ryan Wagner pitched the top of the ninth. He struck out Hart, and fell on his butt beating Tiffee to first base. Josh Rabe singled to center field, and took second base on fielder indifference before Wooten grounded out to third to leave the game in the win column for the Reds.

The win brought the Reds' record to 16-10. They would travel to Winter Haven on Sunday to face the Cleveland Indians.

LaRue Out of Scope

By now, Jason LaRue has probably already undergone arthroscopic surgery on his knee to repair a torn meniscus. He's slated to be out for 10 to 14 days, which is consistent with what they told me when I was facing this surgery. But I don't think that estimate takes into account the fact that LaRue is the toughest thing since Aunt Betsy's pot roast. He'll probably be back at it later this afternoon.

OK, I guess the medical staff will probably prevent LaRue from actually doing that. And assuming that the Latin Love Machine doesn't end up on the reality end of one of the rampant trade rumors, I suppose that means that we'll see Javy Valentín behind the plate on opening day.

And to think I'm going to miss it. Oh well, I'll have the GameDay on my computer at work. That's practically the same thing. At least that's what I tell myself.

Posted in Random Ramblings.
Comments Off on LaRue Out of Scope