The Reds took down the Pirates on Monday, 4-7 in Sarasota. 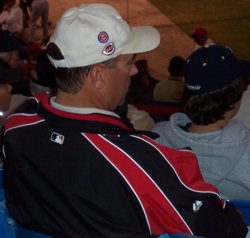 Wayne “Kriv-dog” Krivsky sat three rows in front of us and was only on his cell phone two or three times. He disappeared from his seat for the third and part of the fourth inning. Apparently he was actually interested in seeing the game as he remained in his seat after returning, keeping score in his book and timing people with his stopwatch.

Lefty Eric Milton got the start and made it look easy in the top of the first. He took out Chris Duffy, Freddy Sanchez, and Sean Casey quickly, despite the PA playing “Welcome Back, Kotter” for Casey and the crowd cheering like crazy. Unfortunately, the Reds were similarly disinteresting in the bottom of the first.

Milton struck out Craig Wilson before walking Joe Randa to provide the runner that Jose Hernandez would need to launch a two-run home run to center field. Milton would get another strike out in the inning, though.

In the bottom of the second, Edwin Encarnación doubled off the center (not left) field wall. Scott Hatteberg moved him over with a single to center field, setting up Javy Valentín for a sacrifice fly. Milton flied to right field where the fielder couldn't handle the ball, but Felipe Lopez struck out to strand him on first and Hatteberg on third.

The top of the third saw another home run from the Pirates, this time a solo shot from Craig Wilson. But Griffey was ready to match it in the bottom of the inning with a two-run number after Rich Aurilia walked. Griffey's home run cleared the batter's eye and caused much oohing and ahhing.

Milton got two more strike outs in the top of the fourth and went three-up, three-down in the top of the fifth to finish out his effort for the day. His line when it was all said and done was five innings, five hits, three runs, two walks, four strike outs, and two home runs. For Milton, not bad at all.

Lopez led off the bottom of the fifth with a walk. After Aurilia popped out to the short stop and Griffey flied out to right field, Lopez stole second while Adam Dunn was batting. Dunn then promptly hit a double to center field, scoring Lopez and making the score 3-4.

Mike Burns took over in the sixth to knock down three Pirates in a row. The Reds went down similarly in the bottom of the inning.

The Pirates' Sanchez sacrificed in a run in the seventh to tie up the score at fours, but this time the Reds didn't answer. 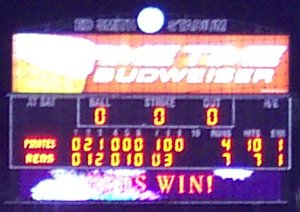 Chris Hammond came in in the top of the eighth inning. He struck out Craig Wilson on a pitch that measured 80 mph by the radar gun of the scout in front of us. Mike Edwards singled just over Lopez' head and advanced on a wild pitch while Ronnie Paulino was batting. Paulino singled to center taking the runner to third. Matt Meath hit to third, getting Wilson in a rundown between third and home. Three throws later, Lopez dropped the ball and the runner was safe at third. Nick Theodorou grounded to third where Frank Menechino touched the base and threw to first to end the Pirates' threat.

Things got interesting in the bottom of the eighth when Griffey doubled to deep right field. Griffey went to third and Dunn reached first on a swinging strike three when the ball got away from the catcher. Ryan Freel came in to pinch run for Dunn. Jacob Cruz struck out but provided 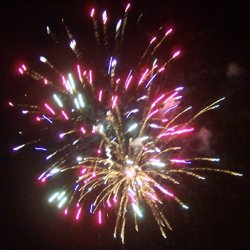 the opportunity for Freel to steal second. The Pirates intentionally walked Hatteberg to load the bases and get to Austin Kearns. Then, while Kearns was batting, a passed ball allowed the runners to advance, including Griffey coming home to get lead: 4-5. Kearns went on to draw the walk and again load up the bases for David Ross to let fly a 2-RBI single to center field. Menechino grounded into a double play to end the inning with the Reds up, 4-7.

Mercker came in in the top of the ninth to safeguard the lead. He induced a broken-bat ground out from Nate McLouth, gave up a single to Duffy, but got Sanchez to ground into a double play to put a win in the books for Cincinnati and set up the mood for the fireworks extravaganza that followed the game.

The win brings the Reds' record to 17-11 and ensures a winning spring for our boys. Tonight they host the Boston Red Sox in Sarasota.