The Reds took home their twentieth win of the spring in grand form against the Boston Red Sox in Fort Myers this afternoon by a score of 4-0.

The Reds' newest rotation fodder, Bronson Arroyo took on his former team and held them scoreless on three hits through his seven innings of work. Rick White and Mike Burns followed up with an inning of relief apiece and each held the Sox hitless.

Scott Hatteberg and Rich Aurilia each contributed a run, Aurilia's on a home run. Austin Kearns contributed two on a two-run single in the eighth inning.

Damn that was a short game wrap. I could get to like this Arroyo kid.

The win brings the Reds's record to 20-11 and their winning streak to four. Tomorrow the Reds visit the Cleveland Indians in Winter Haven at 1:05 p.m.

The Reds outlasted the St. Petersburg Devil Rays of Tampa to win yesterday by a score of 6-7.

Projected Opening Day starter Aaron Harang allowed five runs on ten hits through five innings of work. According to SmartElf, Harang was in fact pitching through flu-like symptoms, so those numbers really aren't so bad, especially when you know that reliever Matt Belisle actually allowed two of those runners to score.

The scoring didn't start until the bottom of the third inning when, with two outs, Felipe Lopez singled to left field and then went on to steal second while Ken Griffey, Jr. was batting. Griffey knocked him in with a double to left field. Adam Dunn then brought Griffey and himself home with a home run to left center to make the score 0-3. Austin Kearns struck out to end the threat.

The scoring started getting crazy in the bottom of the fourth. Scott Hatteberg singled to the shortstop and moved to second when Rich Aurilia walked. Javier Valentín sent a catchable ball to left field, where it was caught. Ryan Freel sent a not-so-catchable bat into the stands behind third base, where it didn't appear to hurt anyone at least (unlike a foul that later smacked someone in the face causing the ushers to wave their hats in the air for medical assistance). Freel went on to single to right center and load the bases.

That's when Tony Womack got one past the shorstop, Lopez singled to left field, and Griffey brought two in with a single to deep center. That made the score 0-7, which was all the scoring the Reds would need. Which is fortunate, because it's also all the scoring they would do.

The Devil Rays would come back to do a little scorimg of their own in the top of the fifth when Jorge Cantu knocked in Carl Crawford with a double to left center. That made the score 1-7.

Their big inning came in the top of the sixth when Johnny Gomes immediately hit a home run to left center field. Greg Norton doubled down the right field line and Travis Lee hit a double off the left field wall to make the score 3-7. Harang hit Toby Hall with a pitch and doubled over as he did it. He then left the game. At the time it wasn't clear whether he'd somehow hurt himself on the pitch or whether he was just physically disguested with his performance, but now that I know he was suffering flu-like symptoms, it's probably safe to assume that he was on the edge of spewing right there on the mound. I bet the World Famous Ed Smith Grounds Crew wouldn't have liked that at all.

So with runners on first and second, Matt Belisle entered the game and handed a bit fat three-run home run over to Ty Wigginton. Thankfully, Norris Hopper caught the next fly ball at the ground in center field to start the series of three consecutive retired batters. The score was 6-7. 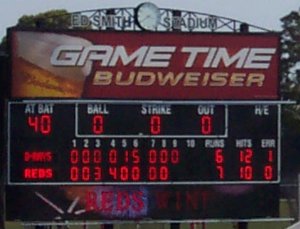 Three Reds struck out in the bottom of the sixth, and not much else interesting happened for the rest of the game until the top of the ninth when Todd Coffey took the mound. Nick Green reached first when he swung at a wild pitch and Javy couldn't get it under control. Green should have advanced to second when Javy overthrew first, but he didn't and all the happier for the Reds. Shaun Cumberland singled to right field and moved the runner to third. Brent Butler bunted and the ball bounced high. Valentín caught it on the bounce and made a Mr. Fantastic-type stretch to tag out Green before he could touch the plate. Michael Coleman was kind enough to ground into a double play and end the suspense.

On a personal note, in the parking lot after the game, I heard perhaps the funniest thing ever spoken in the general vicinity of Ed Smith stadium. A group of midle-aged adults was climbing into a mini-van. The first woman opens the sliding door, sticks her head in, pops back and and says:

The win brought the Reds' spring training record to 19-11. They visited the Red Sox today and if the brief recap I saw on ESPN after the Phillies' game I actually attended this afternoon is to be believed, it looks like Bronson Arroyo had the start today against his old theam that Harang was supposed to have yesterday. Good for the new guy.

The Reds took out the Reds Ox by a score of 5-10 on another Bingo Night Tuesday at Ed Smith Stadium in Sarasota before the appreciative eyes of the Zooper Stars. And a whole lot of other people.

Dave Williams took the mound and gave up three runs on six hits (two of them home runs) over five innings.

The Red Sox had just one of their home runs on the board before Nolan Rhino, Ken Giraffey, Jr. and Cow Ripkin, Jr. did their inflated ditty in the middle of the second inning, but Alex Cora followed up the performance with another in the top of the third (another home run, that is. Not another inflated ditty). Things didn't look too much better for the Reds when David Ross hit a long bomb to right field in the bottom of the third to make the score 2-1.

In the middle of the fourth, Roger Claments swallowed his assistant to the tune of “Weird Al” Yankovic's “Eat It” and spit him back out in his underwear. My son thought it was the funniest thing ever. He repeatedly shouted:

“The clam ate that guy and he came back out naked!”

In the top of the fifth, Kevin Youkilis followed up Coco Crisp's double with a walk to set up a David Ortiz single to right field. For some crazy reason, the base coach held up Crisp, much to the dismay of the primarily Boston crowd. But Manny Ramirez hit a sacrifice fly to right field to make the score 3-1. Williams walked Wily Mo Peña on four pitches, then struck out Hee Sop Choi on three pitches, so I can only assume he was showing off.

David Ross was again responsible for a Red run when he knocked in Brian Buchanan in the bottom of the fifth to make the score 3-2.

Rick White gave up back-to-back doubles in the top of the sixth to Enrique Wilson and Alex Cora to make the score 4-2. With Cora on second, Josh Bard hit a ground ball to short. Frank Menechino threw out Bard at first, and first baseman Andy Abad threw to Tony Womack at second to try to get Cora. Womack dropped the ball. But Bard thought he was out or thought the play was over or thought that staying on second base was just a recommendation but not a rule, so Womack picked up the ball and tagged him out at second. Youkilis would later fly out to center field to end the top of the sixth.

The middle of the sixth brought out Derek Cheetah and Ichiroach Suzuki for a little dance number before the scoring really got going for the Reds. Abad drew a walk, as did Adam Dunn. Little Eddie Encarnación struck out before Menechino knocked in Abad with a single to center. Brian Buchanan grounded to the short stop, but everyone was safe thanks to Dunn's slide and a bobbling Sox infielder.

Boston put in Manny Delcarmen to pitch, and he promptly walked Ryan Freel to score one for the Reds. While Ross was hitting, a wild pitch allowed the runners to advance before Ross grounded out to the shortstop. Tony Womack hit a 2-RBI double to center to make the score 4-7 before Matt Kata struck out to end the inning.

The Reds picked up the scoring again in the bottom of the eighth. Buchanan grounded out to second, but Freel singled to left center. While pinch hitter William Bergolla was putting in his required effort before being sent down, Freel stole second. It was for naught, though, when Bergolla walked. 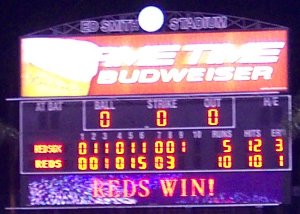 While Jeff Bannon was batting, Freel then stole third. Bannon hit a double down the left field line that scored Freel, made the score 4-8, and left runners on second and third. Matt Kata struck out, but while Abad was hitting, the pitcher balked in a run to make the score 4-9. Abad drew the walk, and Cruz (who is running much better this year, btw) singled in the Reds's final run. Encarnación struck out as the Reds' final batter.

Brian “Love” Shackelford made the top of the ninth inning interesting by giving up a home run to the first batter he faced, and a single to the second. He got a fly out and a strike out before allowing another double, and finally a line-out to first base.

The win brought the Reds' record to 18-11 before a crowd of 7,624. It was the largest crowd for a Reds' game at Ed Smith, and the second largest ever at Ed Smith. They hosted Tampa Bay in Sarasota on Wednesday.