The Reds beat their intrastate rivals the Cleveland Indians this afternoon in Winter Haven by a score of 10-4.

Brandon Claussen lasted six innings and allowed three runs (all earned) on four hits. David Weathers finally got some work in with an inning of scoreless, one-hit work. Ryan Wagner, whom Chris Graves assures us does not have a season-ending injury also worked a scoreless, one-hit inning. Kent Mercker gave up two hits and run in the ninth.

Joining this motley crew are at least four other players I've never heard of. Apparently the Reds are making the most of their impressive Depth and Versatility in these final games. Maybe they'll give me a shot in the game tomorrow.

The win brings the Reds' spring record to an impressive 21-11. They host the Indians tomorrow at 1:05 p.m. for the last game of the pre-season.

I just got a very interesting phone call. I won't go into it right now, but there's a possibility that I could have a very big announcement before I leave in the morning. Because piquing your interest and leaving you hanging is apparently what I'm all about. 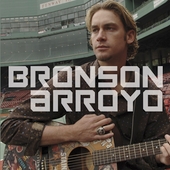 So we had Bronson Arroyo on the payroll for, what, 12 hours before Doc Scott at Reds & Blues felt the need to make some demeaning comment insinuating that Red Hot Mama has nothing better to do than to review players' music CDs?

Dammit, I wish I'd said it first. It's so much cooler to be self-effacing than to be effaced by someone else.

Bronson Arroyo's Covering the Bases is a collection of covers of 12 of his favorite songs from the 90s. Now, I was almost ready to forgive him for that until I saw this among his thank yous in the liner notes:

To my sister, Serenity, for never getting me into music in the eighties and ruining my musical taste.

What a punk. Doesn't he know it takes a real man to cover Wake Me Up Before You Go-Go?

But I digress. Arroyo is an above-average singer. You know how when you hear someone singing badly, you just want to cringe in embarrassment on their behalf? I never even once wanted to do that while listening to this CD. Occasionally he slips into impersonating the original singers instead of giving his own original rendition of the hits, but that's not really bad.

And if Mr. Arroyo had to cover 90s music, he at least chose some of the more palatable tunes from that era. Tracks include:

That last one is an interesting one. Whereas the rest of the tracks are pretty standard fare Seattle alternative, Dirty Water is a bunch of New England jingoism that features several of Arroyo's then-teammates singing about what they like best about Boston. It's a stylistic departure from the rest of the album, and the comment about it in the liner notes is distinctly sparser than for the rest of the tracks. Despite its theme, it seems like an utterly replaceable track. I think that in future releases, he ought to slip in a cover of This One Belongs to the Reds instead.

In summary, Covering the Bases is a solid piece of music work and a nice addition to musical collection of any grunge and post-grunge era baseball fan. Those of us hoping for an album of covers of Wham! songs will just have to wait until Jim Edmonds comes out with an album.

Posted in Reviews.
Comments Off on CD Review: Covering the Bases

Don’t Look to the Jersey Number for Help

This guy is a hardass, but only because of all the hardware he's got installed in there. 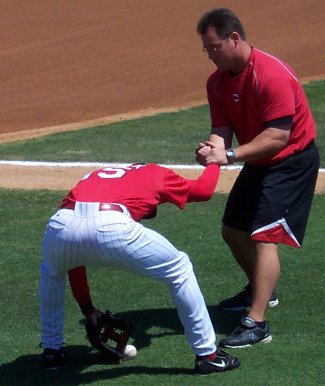 The answer to our last Name That Player photo was Tony Womack. Congratulations to everyone who guessed right.
Posted in For the Ladies.
4 Comments

I can't believe I come home tomorrow. I realize that most everyone else is anxious for spring training to be over and for real baseball to commence, but the end of spring training for me means going back to the Midwestern weather, greatly reduced chances of running into baseball celebrities, and missing games in favor of gainful employment.

At least I'll get my persistent Internet connection back. And I've accomplished almost everything I set out to do on this trip:

On Tuesday I saw Marty Brennaman at Ed Smith stadium. When I introduced myself and said we'd met briefly at the Reds Caravan stop in Indy, he did seem to remember me. And when I gave him a copy of Funnyball and asked him to give it to Steve Stewart, he agreed. I bet he doesn't get asked to play messenger boy for Steve Stewart very often.

After the game, I also ran up to the press box and said hi to Marc Lancaster. I might not have been as cool as the guest who actually got to go inside the press box that night, but it was a thrill for me. I even gave him a matchbook, which brings the grand total of matchbooks that I've given out on this trip to something like 15. Just 2485 left to go!

The only thing that I haven't done yet is present the hand-crafted gift I've put together for Jerry Narron. I had direct access to him the first three days I was here, but as soon as I got the damn thing framed, he became impossible to get face time with. But there's one more game tomorrow, one more chance. Assuming, of course, that I haven't again drunk my weight in beer.