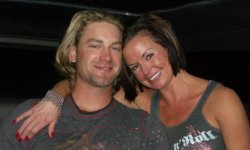 Thanks to On The DL, we can check out some candid shots from spring training with the ladies.

It's nice not to think about Gary Majewski for a minute.

Posted in Random Ramblings.
Comments Off on Bronson Arroyo Caught On Film

This is a tough time for us, but we understand that the team was desperate for bullpen help. We've seen the need for it ourselves painfully often.

So, sure, it stings to be traded for middle relief, but we wish the Reds luck and will go do our very best for the Nationals.

Jimbo gave me five players and I gave him three. I win!

I am so awesome.

Despite the overwhelming veteran presence in the infield, the Reds managed a win last night over the Rockies, 1-3.

Aaron Harang got his tenth win! Yay! So shut up all you stupid people calling Bronson Arroyo the number 1. *pbbbbt*

I mean, Aaron Harang was unstoppable, giving up zero runs on just three hits and two walks through seven innings pitched. He struck out seven.

New guy Gary Majewski didn't fare so well, allowing the Rockies' only run on two hits through two-thirds of an inning. Kent Mercker struck out the final batter to get him out of the eighth.

Eddie Guardado, the recent bullpen acquisition that made good fiscal sense, closed out the ninth without a hit.

Adam Dunn continues to do well, going 2-for-4 with an RBI. It was Dunn's place in the order where Narron stuck our new reliever when he came in the game. Dunn was not the last batter before the relievers came in, and the Reds enjoyed only a three-run lead (to become two-run shortly after Majewski took the mound).

There are times I think Narron wants to lose.

Jason LaRue continues to capitalize on David Ross's injury, thanks in part to your generous donations to the Buy LaRue a Hit Foundation. He was 1-for-2 last night with an HBP and an RBI. Fortunately, this resurgence is improving LaRue's trade value: Krivsky could package him with Dunn in exchange for a washed up middle reliever from Kansas City now.

Errors were committed in the field by Royce Clayton and Rich Aurilia. The irony is so thick, you could cut it with a knife. And it's so lost on Narron, that I just want to puke.

Remarkable that I could feel so negative about a win. It'll help once the games are on t.v. again and I can start bonding with the new guys. But that won't happen tonight, when the Reds take their 47-44 record into battle against Bronson Arroyo. He faces Aaron Cook at 6:10 p.m.