Scott Wiliamson for A ballers

“The San Diego Padres found the bullpen help they were seeking, acquiring right-hander Scott Williamson on Saturday from the Chicago Cubs in exchange for two minor league pitchers.

The Cubs received Class-A pitchers Fabian Jimenez and Joel Santo in the deal. The Padres are still looking for a third baseman before the trading deadline. ”

Mercker on DL; Shack to Return

Just heard Marty say that Kent Mercker has been placed on the DL retroactive to yesterday with inflammation in his shoulder. The Reds are expected to recall Brian Shackelford tomorrow.

I feel like saying something about a “Shack Attack” about now, but I think I'll keep it to myself.

The Red Reporter Is Down Game Thread

Looks like Red Reporter is down, and I'd hate for you guys to be forced to go over to Redleg Nation or Redszone to discuss the game, so I'm putting up a post for your discussing convenience. Sort of a place to crash when your regular place has crashed. 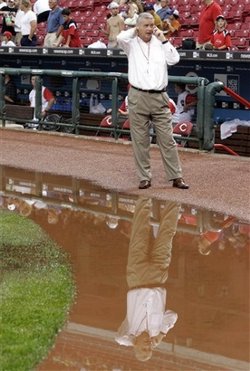 Kriv-dawg? I think I'm in love.

The rain delay was again good to the Reds in this 5-6 win on Friday. Well, Friday/Saturday.

Elizardo Ramirez lasted five innings, allowing five runs (earned) on eleven hits. Not a great night for The Lizard, but nothing the offense couldn't overcome. The Brewers' runs came in 1s and 2s, not grand-salami fours. That's nice.

Jason Standridge, suddenly the reliever of choice, worked the sixth and seventh without a hit. Bill Bray did the same, getting two strike-outs in the eighth. Gary Majewski got the win with his one hit, no run ninth inning.

The Reds didn't score a run until after the Brewers had scored all of theirs. Jason LaRue hit a solo shot in the fifth inning to get things going. See? Your contributions CAN make a difference. Enjoying his first start in what feel like forever, Edwin Encarnación put his one hit in four at-bats to good use with a two-run shot in the seventh.

Then came the half-inning of which you can see clips crammed into 30-seconds on ESPN News: the bottom of the ninth. Derrick Turnbow, who is now enjoying a 34.36 ERA this month with zero saves in four opportunities, took the mound and gave Brandon Phillips a single to center field. Scott Hatteberg pinch hit for the perfectly-reasonable-to-pinch-hit-for LaRue and walked. Dewayne Wise laid down the sac bunt to move the tying runs into scoring position.

Ryan Freel walked to load up the bases, and the Brewers changed pitchers. Dana Eveland walked Javier Valentín to cut the lead in half, giving Javy an RBI without having an official AB and setting up Ken Griffey, Jr. to single to center. He brought in the winning runs and the happy, happy feelings of the sleepy, sleepy fans.

The win brings the Reds' record to 51-46 and gives us some home for tonight's 6:10 affair that pits Joe Mays against David Bush. Pray for rain.