Even the offensive power of Brandon Phillips was not enough to beat the Brewers today as the Reds fell 4-1.

Eric Milton took the loss as he allowed four runs (earned) on five hits and four walks through six and two-thirds innings. I think it's worth mentioning, though, that Gary Majewski was the one to actually allow half of those runs to score. Convenient for him they were inherited runners. At the end of the night, his line shows zero runs on three hits through an inning and a third.

Todd Coffey rounded out the show, allowing zero runs on one hit in the ninth.

The Reds' lone run came on a solo shot by Brandon Phillips in the eighth inning. The Reds had only five hits all day; they would have had to have scored on all of them to win this game.

Edwin Encarnación was again out of the line-up today for no concrete reason, but the crime of “being young” seems like a likely candidate. In his place was Rich Aurilia, whom Narron seems to have forgotten can play in places other than the corners. Juan Castro at short went 0-fer and Phillips hasn't had a day off in recent memory.

The loss brings the Reds' record to 52-47. The Cardinals won, so the Reds stand five games back of first. They stand five games ahead of the third-place Houston Astros, whom they go to visit on Tuesday. Aaron Harang takes on Roger Clemens.

Ryan Freel's two home runs plus a bunch of other offense was enough to overcome the pitching on Saturday as the Reds beat the Brewers 7-8.

Joe Mays got the start after 16 days with no action. But don't worry, the time off didn't make him rusty: he was just as good at giving up runs on Saturday as he ever was. He lasted three and two-thirds innings allowing five runs (earned) on five hits and three walks.

The suddenly solid Jason Standridge finished off the four and worked the fifth without allowing a hit. I guess they made the right choice in designating Esteban Yan after all.

David Weathers allowed two runs (earned) on one hit and two walks in the sixth inning for the blown save. Bill Bray worked an inning and a third allowing zero hits on one walk. Todd Coffey finished off the seventh without a hit for the win. Eddie Guardado allowed zero runs on one hit in the eighth for the save.

Whew! You go through a lot of relievers when your starter lasts less than four innings.

Freel led the offense with a 3-for-4 night that included two home runs and three RBI. Homer number six (really number seven) led off the game. Home number seven (really number eight) was another solo shot in the eighth inning that was the last run the Reds would score and the margin of victory.

Scott Hatteberg, who also went 3-for-4 with three RBI, hit a two-run home run in the first inning. Damn that guy is hot! So, of course, Jerry Narron pinch-hit for him in the eighth inning.

Edwin Encarnación got to start. Yay! He was 2-for-5 with a run scored; therefore, he would not start the next day.

The win brought the Reds' record to 52-46. They would go for the sweep of the series on Sunday, sending out Eric Milton to face Tomo Ohka.

This week on the podcast, enough time has finally passed for me to be able to talk about The Trade with my Crack Technical Staff. Before it was just too soon. I&apos;m very sensitive, you know.

We also discuss the market for middle relief, the awesomeness that is Ryan Freel, Joe Mays last night, and prospects for the rest of the season.

Posted in Podcasts.
Comments Off on Episode 19: The Trade 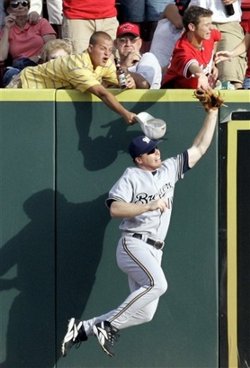 Posted in Pretend Captions.
Comments Off on Autograph Hound