If the Cardinals haven’t gotten around to having a TLR sunglasses giveaway yet, now they’ve got two more years to work on it. 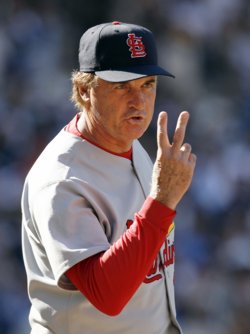 ST. LOUIS — Tony La Russa, the winningest manager in St. Louis Cardinals franchise history, today agreed to a new two-year (2008-09) contract with the ballclub. The announcement was made by Cardinals’ Chairman William O. DeWitt at a press conference this afternoon.

“We couldn’t be more pleased with Tony’s decision to remain a Cardinal,” stated DeWitt. “During his 12 seasons as our manager, he has been a terrific leader; one who is skilled at keeping the team’s performance and focus aimed at being a consistent playoff contender.”

“At the end of the season, after we had worked so hard, I needed some time to get away and refresh,” said La Russa. “I had time to think about the many relationships with the Cardinals that have been built over the past 12 seasons.

Then you see how our division keeps improving, and it became clear to me that all of these things were what I wanted to remain a part of.”

La Russa’s Cardinals teams have finished above .500 in nine of his 12 seasons. They recorded 105 wins in 2004 and 100 wins in 2005, making La Russa just the second Cardinals manager to oversee two 100-win seasons. Billy Southworth guided the Cardinals to three consecutive 100-win seasons from 1942-44. La Russa and Sparky Anderson are the only managers to have led both a National and American League team to World Series titles.

During La Russa’s 12 years at the Cardinals helm, the team has surpassed 3 million in attendance nine times, including a franchise record 3, 552,180 fans this past season. His Cardinals teams have finished no lower then 3rd place in all but two seasons and they have held 1st place or been within a game of 1st place during the month of September in each of the past eight seasons.

Prior to this season’s 78-84 finish, the Cardinals were the lone National League team to have posted a winning record in every season since 2000. 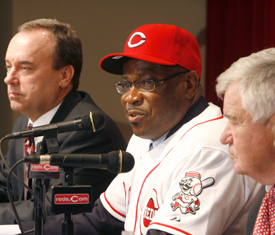 I suppose when you’re the Pirates, there isn’t much to do in October but release your tentative schedule for the next year before the city turns the entirety of their sports-related attention to football.

On the other hand, the city has probably hand the entirety of their sports-related attention on football since June. Whatever. They’ve got to release their tentative schedule sometime.

See the schedule here. Series of note per the official release:

The Pirates will welcome two American League clubs to Pittsburgh for the first time since interleague play began in 1997. Pittsburgh will host the New York Yankees from June 24-26 for the first time since Game Seven of the 1960 World Series at Forbes Field. In addition, the Toronto Blue Jays will also make their first visit to the city of Pittsburgh for a three-game series from June 20-22. Pittsburgh will also host the Tampa Bay Devil Rays in the final weekend of interleague play from June 27-29.

A Yankees-Pirates series in early May might be interesting; by late June I’m afraid the Pirates will already be well into rebuilding for next year.

But will they have beer?

CHICAGO — The Chicago Cubs today announced weekend passes for the 23rd annual Cubs Convention will go on sale Wednesday, November 7, at 10 a.m. CST. Passes will be available for purchase only through two methods – by visiting www.cubs.com or by calling tickets.com at 1-800-THE-CUBS.

The 23rd annual Cubs Convention will be held at the Hilton Chicago, 720 South Michigan Avenue, from Friday, January 18 through Sunday, January 20, 2008. Each fan will be able to purchase up to four (4) weekend passes while tickets last. The convention pass, valid for entry during the entire convention weekend, cost $50 each plus convenience fees. Fans holding a room reservation for the 23rd annual Cubs Convention do not need to order convention passes at this time.

The hours of the convention are as follows: Friday 3 p.m. to 9 p.m., Saturday 9 a.m. to midnight and Sunday 9 a.m. to 1 p.m. Included with each pass is access to all autograph/photo sessions, question and answer sessions as well as the memorabilia and vendor booths.

Rooms at the Hilton are currently sold out for Convention weekend, but fans are encouraged to check back for cancellations or availability by calling 312-922-4400. As a reminder, fans who reserve a room under the Cubs Convention rate can purchase weekend passes for only $10 each (limit four per room).

Proceeds from the Convention benefit Cubs Care. The 2007 Cubs Convention raised more than $300,000. To date, the Cubs Convention has raised nearly $4 million for Cubs Care. Cubs Care is a fund of the McCormick Tribune Foundation. Since 1991, Cubs Care has granted more than $12 million in the city of Chicago to support youth sports, children with special needs and victims of domestic violence. Cubs Care also supports a variety of charitable and social service organizations serving the Lakeview community.

Posted in Chicago Cubs.
Comments Off on Cubs Convention Tickets On Sale 11/7

The Astros have named a new administrative type:

The Houston Astros announced today that the club has named Bobby Heck as the club’s director of amateur scouting.

Journalists in the greater Houston area are going to have to stretch to find reasons to make puns on the Astros’ new director of amateur scouting, but I bet they’ll try. Maybe he’ll make it easy by getting in trouble with the law or something. “To Heck in a Handbasket” is a phrase I expect we’ll be seeing in headlines in the coming months.