And Brandon Phillips isn’t one of them, which is all you really need to know.

Is it really likely that Greg Maddux is still the best fielding pitcher in the NL? I don’t think so, but neither can I come up with a better fielding pitcher, and apparently neither could anyone else.

Jimmy Rollins is the one pick I can get behind, but I’ve been unfairly biased toward J-Roll since I heard him rap on Oh Say Can You Sing? lo these many years ago.

Jose Guillen in Trouble for Steroids

The saucy Jose Guillen is in trouble for getting perhaps a bit too saucy with the HGH.

I suppose “juicy” would have made more sense than “saucy” there. But do we really want to think of Jose Guillen as “juicy”? I know I don’t.

Citing confidential records, the Chronicle said Guillen — whose option for 2008 was declined this week by the Mariners, making him a free agent — purchased $19,000 worth of drugs from the Palm Beach Rejuvenation Center, which along with other anti-aging clinics and online pharmacies in Florida and Alabama, was targeted for illegal sales of drugs, including steroids and HGH. It was raided by Florida law enforcement agencies on Feb. 27. 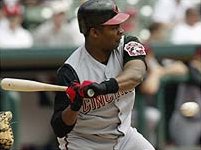 Guillen reportedly purchased the drugs between May 2002 and June 2005, during which time he played for Arizona, Cincinnati, Oakland, the Angels and Washington. Williams was playing for the Diamondbacks in 2002 when he purchased $11,600 worth of HGH, steroids and other drugs, the Chronicle said, adding that Valdez bought $11,300 worth of performance-enhancing drugs in 2002 after he was traded from the Rangers to the Mariners.

It’s poor timing for Guillen, finding himself a free agent just as the news is breaking. I’m afraid he may have no choice but to be picked back up by Jim Bowden.

A story on MLB.com tells us that at the winter meetings the general managers voted 25-5 to investigate the possibility of using video replay to review controversial home run calls. And if five of the general managers can’t even get on board with that noncommittal, limited scope idea, then it’s probably wise to take this slowly.

Sounding very eloquent, Houston General Manager Ed Wade warns of the dangers of the slipperly slope down to accurate umpiring:

The umpires were more right than wrong 99.9 percent of the time,” he said. “With the increased time of the game, at some point you’ll get to a stage where managers are almost compelled to challenge and that’s why I voted against it. I thought the guys on the committee made some very good points. There’s a lot of validity to what they had to say. I just think that if you’re going to do something like that on a limited scope, it doesn’t stay limited.

So, let’s see here: 30 teams, 162 games in the regular season, two teams per game is 2430 total games to umpire. If the umps are right more than they are wrong only 99.9 percent of the time, that means that about two games and a half games per season, they’re getting more than half of the calls wrong. And that doesn’t count the postseason.

Of course, it’s easy not to care about the accuracy of home run calls when you’re the GM of the Astros. What does the commish have to say on the matter?

I don’t like instant replay because I don’t like all the delays,” Selig said. “I think it sometimes creates as many problems or more than it solves. But I am willing to say we’ll at least talk about this if people want to talk about it. I’m going to let the general managers discuss it, let them come back and make recommendations. No, I’m not a big advocate of instant replay.

He’s got a point, but I think that baseball should give it a go anyway. I mean, other sports have managed to survive.