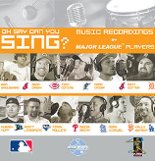 The promotional e-mail I received about Oh Say says “One listen to the disc and you can hear that this isn’t just some novelty or vanity project - Each of the players brings a real love of music to their performances.”

Sure, everyone loves music, I thought. Doesn't prove anything.

And after a few dozen listens, I still think it counts as a novelty project -- that explains finding everything from Sam Cooke to Stone Temple Pilots, from banjo to rap, on the same album -- but even a novelty piece can be of good quality, as Oh Say is.

Really, a novelty is perfect for baseball fans, a lot who pay hundreds of dollars to wear other people's shirts, line up in droves for bobbleheads, and make space in their houses for display cases of foul balls. This particular baseball memento is just as autographable as the others, but has the surprisingly useful secondary function of playing music. And the music is so squeeky-clean that it's appropriate for fans of all ages.

Plus, a portion of the players' proceeds go to their favorite charities. Jeepers creepers, people, what more could you want?

The Reason I'm Writing This
Cincinnati's Sean Casey doesn't suck in his rendition of Toby Keith's How Do You Like Me Now?, and he's probably even better than that. My review of his performance undoubtedly suffers from this song selection. I find Toby Keith to be unnecessarily mean-spirited in his wannabe attempt to be country music's newest bad boy.

Case-in-point, the song that Casey performed details the story of a high-school loser who turns out to be a big-time musician and his crush on the “perfect” girl who turns out to be miserable and alone. But instead of speaking to the irony or showing the poor woman any pity, the song rubs her nose in it by posing the song's title: how do you like me now?

The song selection was a stylistic mismatch for Casey's sweet-as-sugar public persona. However, I imagine there are tons of Toby Keith and Sean Casey fans in the tri-state area that would beg to differ, so I probably just don't know what I'm talking about.

A Little More on Song Selection
On the flip side, the Indians Ben Broussard does a better-than-passable job on U2's With or Without You, and gets bonus points for choosing one of the probably ten sexiest songs of all time. LA Dodgers' Kelly Wunsch gets similar points for performing John Mellancamp's Hurts So Good. I'd listen to these guys sing any day of the week.

Marlins' Jeff Conine made an ambitious effort to perform Stone Temple Pilots' Plush. If he keeps at it, he may tear up his vocal chords enough to put on a truly great performance.

A Wide Variety
Matt Ginter contributes the bluegrass flavor when he gets out the banjo and sings Dooley by The Dillards. Ginter's performance is solid, and I've gotta give mad props to anyone who can play the banjo. That's skills, baby.

The album features two original rap performances by Indian's Coco Crisp and Phillies' Jimmy Rollins. I'm not adequately versed in rap to know whether either performance was actually good, but I do find myself bouncing along with them when I listen in the car.

The final “suckas” of Rollins' rap is still ringing in your ears when Ozzie Smith completely changes the flow with his fantastic rendition of Cupid by Sam Cooke. Mad props for him, too.

The Best of the Best
Aubrey Huff absolutely runs away with the show when he performs John Michael Montgomery's Letters from Home. Now, I've been a John Michael Montgomery fan for years, but this song is just too much for me. When it was at its hottest, I had to stop listening to country radio at work because I couldn't keep from crying whenever this song came on, and you can't spend your work day all red and puffy of face. Now I'm no better off at work, as Huff's version is, and I'm going out on a limb here, just as good as the original. Demmit. Couldn't he have sung Sold??

Padres' Scott Linebrink also does a great job with Wave on Wave. In fact, if I were him, I would have been pretty irritated to have to follow Huff. Without that Huff's track, Linebrink may have been the star of this album.

However, the song that I wait in acute anticipation of every time through is Omar Vizquel's version of The Goo Goo Dolls' Broadway. Vizquel does have a good voice, but mostly it's that I have such a weakness for a good accent.

Oh Say Can You Sing? also comes with a bonus DVD featuring typical behind-the-scenes stuff, commentaries from all of the performers, and a quick tour of all Ozzie Smith's trophies and rings. So, when you're playing the CD before the game and your buddies ask about it, you can whip out the DVD and really impress them. Especially if you've gotten it autographed.

Posted in Reviews.
Comments Off on CD Review: Oh Say Can You Sing?