Reds add to their collection of former Yankees

I love a man with a big bat:

Jay Bruce has a Blog 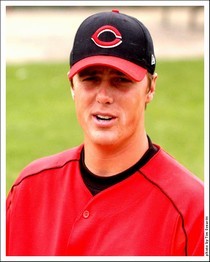 Fans of Cincinnati Reds prospect Jay Bruce will be interested in seeing his bona fide blog on yardbarker:

To give you a little taste, here’s what he says on the trade of Josh Hamilton:

So I’m sure everyone on here has heard about Josh Hamilton getting traded to the Texas Rangers, and next the question around the baseball world arises: WIll Jay Bruce start in Cinci? Well I’m here to say nothing changes from this trade. No matter what, nothing in this world is given to anyone. Sure, I’m excited it happened, its one less outfielder.

Hey, the guy puts together a decent sentence and seems to know his way around punctuation; if this baseball thing doesn’t work out, he may have the chops for a bright future in the lucrative field of baseball blogging. He’s promising video posts in the near future.

Thanks to xjjeep90 for the tip.

Posted in Cincinnati Reds, Random Ramblings.
Comments Off on Jay Bruce has a Blog