NLC’s Hotter Baller – Round 1 – Battle of the Brandons 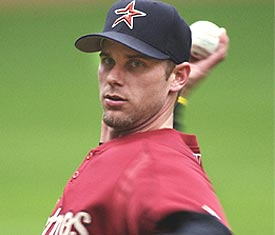 Our third pairing sets the Astros’ Brandon Backe against the Reds’ Brandon Phillips. I suspect that this is the 1-16 seed game, but maybe Backe will surprise me.

OK, so this battle of the Brandons might be more fair if it were Brandon Claussen representing the Reds, but Backe isn’t bad, especially by Astros standards. And his 3-1 record in 5 games last season would have trounced Claussen.

A new member of the 30-30 club, a spectacular fielder, and the subject of debate over his parental status, Phillips may be the single-most exciting player on the Reds right now. And that includes Mike Stanton!

Posted in Brandon Phillips, For the Ladies.
Comments Off on NLC’s Hotter Baller – Round 1 – Battle of the Brandons