Padres 3, Cardinals 4: Not an All Star? Not a Problem

Kyle Lohse responded to not being picked to the All Star team by dominating the Padres and beating Jake Peavy, to boot.

Lohse pitched 7 innings, allowing only 2 runs on 7 hits. He struck out 4. That was enough on a day when Peavy was home run happy.

Peavy allowed 4 solo shots. Two to Troy Glaus, who opened the second half with a far stronger bat than he’d shown in the first half, one to Rick Ankiel, and one to pinchhitter Joe Mather.

The Cardinals picked up a half game on the resting Cubs.

Posted in Game Wrap, NL Central, St. Louis Cardinals.
Comments Off on Padres 3, Cardinals 4: Not an All Star? Not a Problem

Adam LaRoche knocked in a pair of runs with a double to give the Pirates an early 3-run lead last night, but it wasn’t enough.

Paul Maholm could not hold the lead. Although perfect through the first 3 innings, things derailed quickly, and he ended up leaving the game after pitching 6 innings and allowing 5 runs on 8 hits.

So the Pirates, like the Reds, started the second half of 2008 like they have spent the vast majority of the last two decades: losing. However, I actually have a more positive feeling about the future of the Pirates than the Reds. I mean, the Pirates don’t have Dusty Baker. 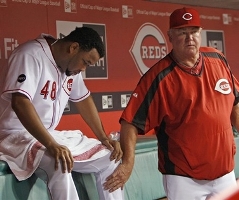