The St. Louis Cardinals sent out Kyle Lohse against the Braves last night, hoping to continue their dominance.

Lohse did. He lowered his ERA to 1.97 with a 6-inning shutout performance. Unfortunately for him, there was another Kyle who couldn’t match those zeros.

Kyle McClellan came on in the 8th with the Cardinals leading 1-0, thanks to an RBI by Yadier Molina. And then McClellan couldn’t even make it out of the inning. He walked 3 to load the bases and then gave up a single to Matt Diaz that sealed the Cardinals’ fate.

I guess Cardinals fans will just have to deal with still having 1st place all to themselves.

They Aren’t Even Talking about the Play on the Field

It’s one game that you won’t see the Red Hot Family at, what with the sneezing and the hives and all, but if you do not have severe canine allergies–if you are, in fact, one of those rare people who actually likes dogs, you’ll want to know about the Bark in the Park dates coming up this year.

Bark in the Park is back, and you can reserve your seats now to enjoy the excitement of Reds baseball alongside your pet at Great American Ball Park. A special seating area is reserved for dog owners and their pets, while the Fan Zone will turn into the “Dog Zone,” with product samples and activities for both dogs and owners. 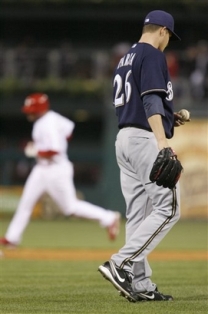 I realize that now that we’re a couple week into the season it’s a little late to be talking team previews. But this is a particularly polished and in-depth preview of the Brewers’ 2009 season at The View from the Dugout.

After a couple years of being predicted “The Sleeper” team, the Brewers’ relationship with C.C. Sabathia last season is now over, and Ben Sheets is out of the picture as well. What’s in store for this team struggling to find their shape? So far, a 4-8 record, but the season is long.

Krylon, the makers of wood stains for all your outdoor wood furniture needs, have a baseball-related sweepstakes going on. At http://www.saveoursaturdays.com/, you can “get in the game” by answering their monthly question, “Which baseball team will have the most wins by May 1, 2009?”

Check it out, and if you win something good, don’t forget who told ya.

Posted in Random Ramblings.
Comments Off on Baseball is Finished

In favor of breasts

I would have said “in support of breasts,” but I’m saving that for when the Reds join forces with Victoria’s Secret for a line of baseball-themed lingerie. — RHM

MAJOR LEAGUE BASEBALL AND SUSAN G. KOMEN FOR THE CURE® LAUNCH CAMPAIGN TO FIND “HONORARY BAT GIRL” FOR EACH CLUB

Major League Baseball (MLB) and Susan G. Komen for the Cure® have collaborated to launch a search to find an “Honorary Bat Girl” for each Club in celebration of Mother’s Day in stadiums around the country. Lasting until May 1, MLB.com will host a contest providing fans an opportunity to share stories of “going to bat” against breast cancer in their daily lives. The initiative is aimed to raise additional awareness and support for the annual ‘Going to Bat Against Breast Cancer’ program, a joint partnership between MLB and Komen for the Cure, the world’s largest breast cancer organization. Winners will be selected on May 1 by a celebrity panel consisting of MLB Network’s Mitch Williams and Dan Plesac, New York Yankees OF/1B Nick Swisher, Houston Astros 1B Lance Berkman and Baltimore Orioles OF Nick Markakis. Men and women 18 and older can submit stories and vote for their favorites on www.mlb.com/honorarybatgirl.

During the registration period, Baseball fans can share their stories of inspiration and hope of how they are supporting the fight against breast cancer in their daily lives and why they want to be an “Honorary Bat Girl” for their MLB home team. Testimonials can be submitted by breast cancer survivors, advocates or supporters of the cause.

“Major League Baseball is excited to launch this new campaign recognizing the incredible lives of our fans who are leading the fight against breast cancer,” said Tim Brosnan, Executive Vice President, Business, Major League Baseball. “It is an honor to expand our partnership with Susan G. Komen for the Cure. We are committed to using the popularity of Major League Baseball to help Komen raise funds and awareness for this important cause.”

On Mother’s Day (May 10, 2009), Major League Baseball players will wear pink wristbands and the symbolic pink ribbon for breast cancer awareness will be displayed on player uniforms, as well as on all onfield personnel. Additionally, Louisville Slugger, the Official Bat of Major League Baseball, has produced pink bats stamped with the MLB breast cancer logo, which will be available for players’ use on Mother’s Day weekend. In addition, dugout lineup cards will be pink. The Louisville Slugger pink bats will be auctioned off at a later date to raise additional funds for Susan G. Komen for the Cure. Several players will individually represent their teams on Mother’s Day, and most have personally experienced the effects breast cancer (and other cancers) have had on their families. These players include Los Angeles Angels of Anaheim P Jered Weaver (mother survived breast cancer), Berkman (aunt survived breast cancer), Markakis (mother survived breast cancer) and Los Angeles Dodgers P Jason Schmidt (mother passed away from brain cancer).

“Major League Baseball’s partnership and support over the years has been a vital part in enabling us to move forward in our promise to save lives and end breast cancer forever,” said Katrina McGhee, Vice Rresident, Global Partnerships at Komen for the Cure. “The introduction of Honorary Bat Girls is exciting because the passion and the personal stories of breast cancer advocates are what keep us going.”

Prior to each Mother’s Day game, each “Honorary Bat Girl” will be invited to participate in pre-game on-field activities, will be publicly recognized during an on-field ceremony, will receive a ticket to the game and will be given special baseball pink product. All 30 Clubs will be represented in this initiative—visiting teams on Mother’s Day will select another date in May to honor their “Honorary Bat Girl.”

The celebrity panel consisting of MLB players and MLB Network talent will select each “Honorary Bat Girl.” New York Yankees 1B/OF Nick Swisher is an advocate of fighting all forms of cancer. In 2007, Swisher grew his hair out to donate it to create free wigs for women dealing with hair loss from cancer treatment. Today, Swisher continues to participate in the on-field activities of MLB’s “Going to Bat Against Breast Cancer.” MLB Network analyst Mitch Williams’ mother survived breast cancer and he is still involved in helping charities associated with the disease. MLB Network analyst Dan Plesac’s mother was recently diagnosed with breast cancer.

Major League Baseball Health Initiatives
The Mother’s Day “Going To Bat Against Breast Cancer” program is one of several cancer-related initiatives
supported by Major League Baseball. Other partnerships include Stand Up To Cancer, an innovative charitable campaign designed to raise philanthropic monies for accelerating ground-breaking research; the Prostate Cancer Foundation Home Run Challenge which helps increase awareness of prostate cancer and raise money towards the search for a cure as part of Major League Baseball Father’s Day activities; the Commissioner’s Initiative for Kids supports the CureSearch National Childhood Cancer Foundation; and Play Smart When it Comes to the Sun, a league-wide, season-long skin cancer awareness program in conjunction with the Major League Baseball Players Association and the American Academy of Dermatology.