The Red Hot family traveled down to Cincinnati over the weekend to catch a game. Unfortunately, the first one was rained out. Fortunately, the schedule was flexible enough to allow the rain-out tickets to be redeemed for the very next day. The Reds lost of course, but it was neat to see the ballpark. I heartily approve of the new, improved scoreboards. Although the pitch speed is a little slow to appear. Here are a few pictures from Saturday’s game. 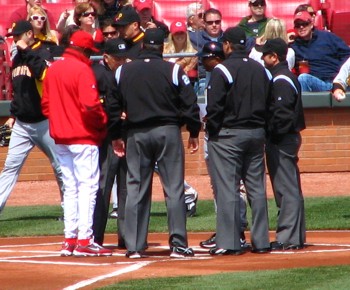 “Dusty, are you really sure you want Phillips hitting cleanup?” 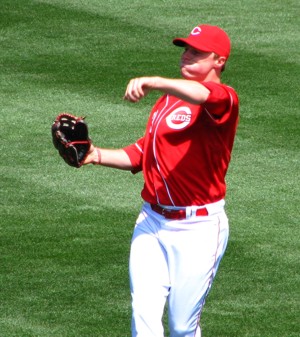 Jay Bruce long-tossing with the right field ball boy. Despite capturing him in a bad shot here, Bruce actually looks better than he does later in the game. 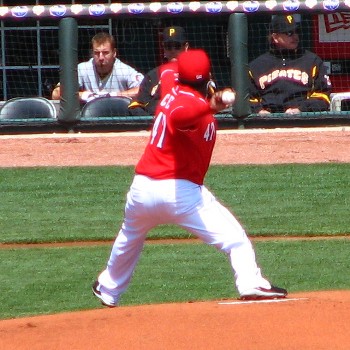 Johnny Cueto striking out 1 of 9 on the day. 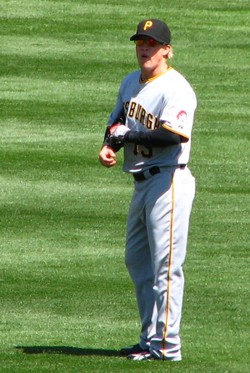 We ran into Nate McLouth in the elevator of our hotel. The Red Hot Child told him about Friday’s game being rained out. McLouth asked, “Are you a Reds fan?” That’s when we should have responded, “Yes, which is why we don’t know who you are.” I kinda think his joking with our son gave him the karma to destroy the Reds on Saturday. 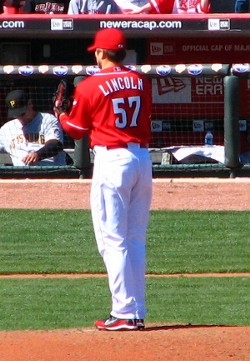 I’ve heard many, many times that Mike Lincoln is a decent reliever. However, given how badly he always performs when I’m physically present, I think he should consider paying me to stay away. 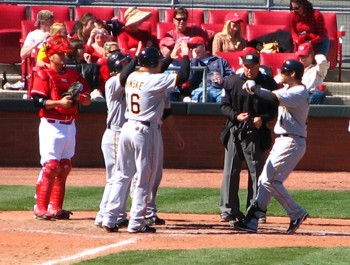 Here we see the Pirates congratulating themselves after Mike Lincoln allowed a grand slam. 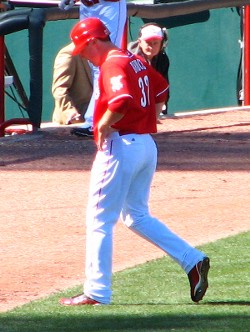 Jay Bruce looking ashamed after his boneheaded mistake to get doubled up at first. I haven’t seen play that bad since little league.

Even The Westin Doesn’t Want Reds To Win

According to this slice of life story from Reds MLB.com writer Mark Sheldon, Chris Dickerson is now getting beat up by revolving doors.

Apparently, he banged his head during a recent trip through the revolving door of a hotel he was staying at while in Cincinnati. Knowing that Westin is the Reds official hotel and having come from a stay at the Cincinnati Westin and run into one of their revolving doors, I can only determine that Westin is now against the Reds. Hey, one more party jumping on the Fire Dusty Baker bus is fine with me.

Dickerson had this to say:

They do need to do something about that door. It’s a deathtrap waiting to happen. I can only imagine what happens with people less coordinated than me. I’m a little clumsy, but a pretty coordinated guy. I should be able to fly through that thing easy. I struggle with it every day.

Revolving doors are the suck. They allow fewer things through than bigger doors and can stop quite suddenly. Hopefully, Dickerson will overcome this new nemesis soon, allowing him to focus on those dreaded left-handed pitchers.

During yesterday’s game between the Reds and Pirates, the Reds TV feed displayed a graphic that showed Aaron Harang had received the second-least amount of run support last year. I’m sure that contributed greatly to his crappy record.

The bad news is that it will only be worse this year, given the Reds’ Judy offense. Opening Day brought one run, while yesterday brought 2! Somehow I don’t expect the linear progression to continue.

Still, Harang was excellent, recording the Major’s first complete game shutout. He held the Pirates to only 3 hits.

Brandon Phillips provided the game’s only offense with a two-run home run in the first. And Pirates shortstop Jack Wilson provided the defense with an amazing glove-flip to start a double play, followed a few innings later with the start of a triple play.

With this triple play and the amateurish baserunning mistake by Jay Bruce in the previous game, the havoc that Dusty Baker promised to bring is definitely happening. Only, I don’t think the word means what he thinks it means.