Javy could be anything when he grows up 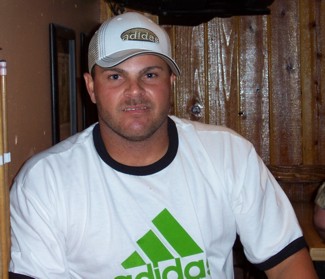 It’s always a pleasure to me to see someone hypothesizing on the potential awesomeness of the Latin Love Machine, Javier Valentín, so I was glad to see this post on Mets Fever, comparing Javy to Fernando Tatis. Tatis hit a bit of a rough patch in his career, but “When he finally returned to the majors, Tatis made the most of his opportunity by hitting .297 while playing LF,RF, 1B and 3B.” Javy, too, is apparently playing the corners now.

Posted in Random Ramblings.
Comments Off on Javy could be anything when he grows up

If you go to Anaface.com, you can subject yourself to a computerized beauty analysis and finally know, once and for all, where you rank on a scale from 1-10.

Joey Votto, FWIW, only comes in at a 6.75. I guess impersonal machines just can’t understand the glow of awesomeness (tonight’s performance notwithstanding). 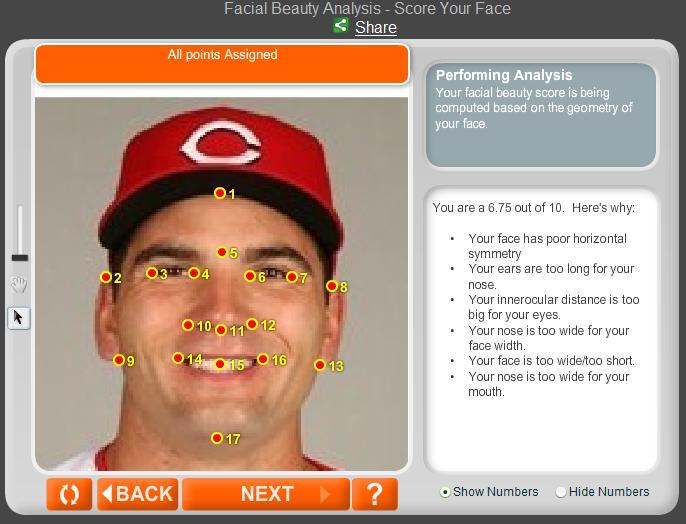 The State of the Reds 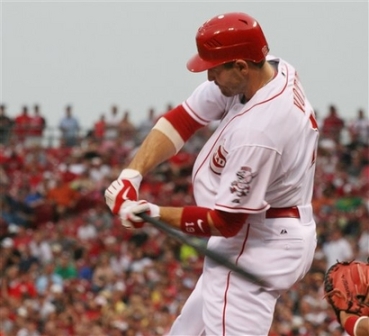 Memorial Day morning 2009 and being a Reds fan is more exciting now than it has been at this time in years. The Reds’ third place in the division doesn’t sound that awesome, but compared to previous years, the future looks so bright.

At this time last year, the Reds were 23-28 and were bringing up Jay Bruce for some much-needed offense. It was even better on Memorial Day 2007 when I had this to say in a post on Red Hot Mama:

So, how ’bout them Reds, huh? It took a head injury to Ryan Freel to even get them to win one against the Pirates after, what, a five-game losing streak? And, in a way, I was sort of disappointed to see them win. They’ve fallen so far already that I just want to see them keep dropping until the ownership has no choice but to make a change. On the other hand, it seems like they already have no choice but to do that and we see all that’s gotten us, so there you go.

I also just have a little bit of a sick fascination with seeing what new way they’re going to find to blow it this time. It’s painful but sort of irresistible, like worrying a sore tooth.

But not so this year. The Reds have just emerged the winners of the Ohio Cup. The in-state rivalry may be manufactured, but Brandon Phillips’ rivalry with Cleveland is genuine and he’s taken great satisfaction in being a Gold Glover in general and cleaning their particular clock specifically. The one game of the series with the Indians that the Reds did lose was the one where Phillips took a ground ball off the thumb and had to leave the game. Coincidence??

Well, Homer Bailey’s performance probably had a little to do with it, but we’ll come back to that.

The over .500 standing is even more special since it comes after the team’s first west-coast road trip, which has traditionally been the event to start them on their downward spiral. While on this trip, they swept the second-to-worst team in the NL, the Arizona Diamondbacks, and looked like they may really be on to great things. We were all happy to see them continuing on their trip to see the worst team in the NL, the San Diego Padres. Alas, the Padres took their turn in sweeping, but amazingly, even that didn’t send the Reds on the death march.

In fact, it doesn’t seem to much matter how good the team is that the Reds play; the Reds are as good as Joey Votto is healthy. This guy deserves the heaps of praise he’s receiving: he’s got a great work ethic, he performs on the field, and he rivals Jason Romano for the best-looking-Red of this millennium. Meanwhile, though, he came down with some mysterious dizziness that it took the Reds medical staff way too many days and way too many tests to diagnose as an inner ear infection. If Votto can just avoid colic, croup, and the other ailments that typically only infants suffer from, this team could really have a shot in the long run.

But even the Herculean Votto couldn’t win all these games by himself and the starting pitching has been turning in some stand out performances. Aaron Harang, always solid but long-plagued by lack of run support, has finally inspired the bats on his team to come out for him. And Bronson Arroyo continues to be his same old predictably unpredictable self: completely lights out all the time when he isn’t walking half of the opposition.

Edinson Volquez, the hot rookie who tore it up in a completely unreproducible way last season had been reproducing his success to start the year. He’s just gone on the DL with back spasms, inspiring the team to bring up Homer Bailey, the hot shot hot prospect who’s failed to show the majors what’s to get so excited about. Bailey still hasn’t quite figured this Big Show thing out yet, and he’s getting dangerously close to being declared in need of a “change of scenery.” Maybe to Cleveland.

As if all that weren’t enough to keep the fanbase on its toes, Dusty Baker has stopped saying so many stupid things. Unless maybe I’m just blocking them out (entirely possible), Baker hasn’t made a big pronouncement of his hatred of baserunners or his desire to see guys swing at anything in the area code. And the stupid things he does have been limited almost exclusively to poor line-up construction, which isn’t actually so bad considering what he’s got to work with. You can send them up to the plate in almost any order when you’re working with promising young players instead of veteran flame outs.

All-in-all, it’s a good time to be a Reds fan. Next year, maybe we’ll be looking back at Memorial Day 2009 saying, “Who ever could have guessed that the third place Reds could have eventually benefited from the Cubs’ inevitable crash?”

The following tidbit is an RHM exclusive, so remember where you read this first: the Reds now have three outfielders who have finished in the top five in Rookie of the Year voting within the past 5 years.

Today, Jonny Gomes stepped off the bus from Louisville and ripped the first pitch he’s ever seen in the NL down the left field line for a pinch-hit double in the eighth inning, subsequently scoring the go-ahead run for the Reds in a 3-1 series opening win over the Indians. Hopefully just a sample of what he’s going to do to NL pitching.

Now let’s see how long it takes the beat writers to pick up on this!

Posted in Cincinnati Reds.
Comments Off on

LOS ANGELES – The Dodgers plan to win over a huge percentage of the female market tonight when they air a broadcast that explains simple baseball terms in a way even a woman can understand.

The “DodgersWIN broadcast” came from a team initiative to draw in more women fans. Jeanne Zelasko, who broke into the business on the Fox pregame show, will do play-by-play with Dodger assistant coach Mark Sweeny providing color.

“I like to look at our broadcast as we’re not afraid to explain something most people might take for granted,” Zelasko said.

One specific example occurred during a recent run through when Sweeney made references to the “six hole,” Zelasko said.

“I knew what it meant, but I wanted to make sure he knew, ‘Mark, tell people what you mean.’ It’s the sixth spot in the lineup,” Zelasko told City News Service.

Using more transparent language in every broadcast, not just the special women’s broadcast, would raise the quality of the reporting and make the sport more accessible to all new fans, not just women. But the idea was shot down in embarrassment.

“What if science journalists had to use layman’s terms when talking about CERN? What if White House correspondents had to explain who Mona Sutphen or Rahm Emanuel are?” said Dodger CEO Jamie McCourt with a derisive laugh.

The broadcast will be available only from the Dodgers’ website and only for Wednesday games at night at home.

“We think that women with no existing interest in baseball will definitely mark their calendars to remind themselves to stop what they’re doing, log on to our website every other Wednesday, and sit with rapt attention while we exhaustively explain to them what the “six-hole” is,” said Zelasko.

“This is how we make baseball accessible and fun.”

“This will make all the difference to me,” said Heirmie Roar, a soccer mom in the LA area. “The fact that players are talked about like machines rather than humans isn’t a problem, and the shortage of women on the field and in the booth is actually a plus. I’ve been more than willing to let my responsibilities at work and home pile up while I sit in front of a three-hour game, but no matter what I do, I just can’t seem to remember what a ‘six-hole’ is.”

McCourt says this affects, “Even women who have been watching baseball for years. Women just don’t have the capacity to pick up the vernacular, and that’s the only reason we can think of for why they’re not fans.”