Jay Bruce Talks about being “The Deal”

No, that’s not me interviewing Jay Bruce, though I thought it sounded so much like myself (plus the fact that RHM is mentioned right off the bat) that I found myself trying to remember if I’d gone on a Cincinnati-land bender armed with a camcorder and the kind of charm that gets you a 3-minute interview with an up-and-comer.

This video appears on Bruce’s blog on Yardbarker.com

Personally, I kinda hope “The Deal” doesn’t stick, because I think it just invites “What’s the Big Deal?” kinds of comments.

You Have Boo On Your Hat

The Crack Technical Staff and I finally made it to Victory Field for the first time this season to see the AAA Pirates’ affiliate in Indianapolis play the Chiefs. In addition to seeing Corey Patterson playing for the Syracuse Chiefs (AAA team for the Washington Nationals (as if AAA wasn’t bad enough but for the Nationals??)) we also had about the cutest baseball-related encounter you can imagine. 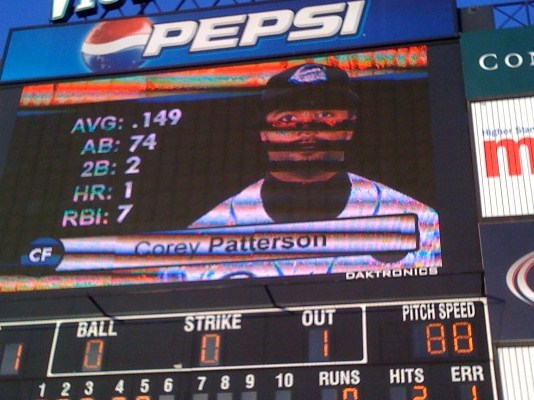 As we sat in the left-field berm, a little tot, about 3-years old, walked up to Jon.
“You have boo on your hat,” the tot said to Jon.
Jon was wearing the red-C on black, not a bit of blue on it. “What’s on his hat?” I asked the little guy to clarify.
“Boo,” he said pointing to the wishbone C, “Boo Reds.”
About this time, I noticed the tot was wearing a Cubs cap. “Oh, I get it, you’re a Cubs fan, aren’t you?”
“Yeah. Boo Reds,” he said, as cute as a freakin’ puppy.
“You’re doomed to a life of misery,” Jon told him.
“Yeah,” he said, not understanding, and wandered back to his family.
“I don’t know know where he gets it,” his father told us in mock ignorance, from his vantage 10 feet away.

I found an interesting take on what makes curve balls so effective via reddit today.

Apparently, the spin of the ball tricks the eyes, enhancing the break effect of the ball. The effect is displayed using an interactive Flash app, but I’d like to see uses of real-life video.

Posted in Random Ramblings.
Comments Off on Curve Ball Illusion

Gorgeous, Dizzy, and a Half Game Out 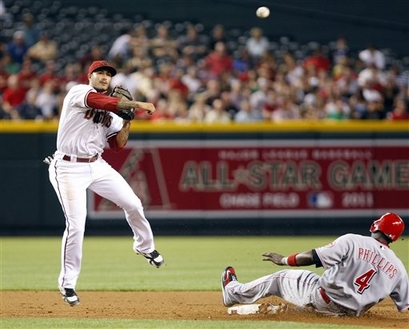 The Reds didn’t play today–taking a day to travel from the unhappy confines of the Arizona Diamondbacks to the unhappy confines for the San Diego Padres–and by virtue of that inactivity, have fallen from a four-way tie for first place in the division this morning to being a half game behind the Brewers and Cardinals.

That’s not really anything to worry about, unlike the dizziness that Joey Votto continues to experience. From the story on Reds.com:

“I felt a little off then,” Votto said. “Then during my at-bat [in the top of the fourth], I felt my heart really racing and I felt really odd. After I flew out to finish the inning, I was on the field and I couldn’t center myself.”

Sure, it’s probably just the lingering effects of the flu or possibly the dry desert heat, but if it’s vertigo from the heights he’s suddenly ascended to, this could be an ongoing issue.

“Our swag is real nice right now. We’re picking each other up. Our team chemistry is gorgeous. Everybody on this team is rooting for each other. When somebody gets a hit, you see everybody in the dugout going crazy. Honestly, this is the best team I’ve played on. The guys on this team pick each other up.”

Posted in Random Ramblings.
Comments Off on Gorgeous, Dizzy, and a Half Game Out

Micah Owings has taken the mound tonight against Haren of the Diamondbacks, and I am out of practice in this game thread writing. It certainly doesn’t help that we’ve been switching back and forth with the season finale of The Biggest Loser (I have a sense that I would have, at some point in the past, have made a comment about not needing to change the channel for that), but I’m afraid I’m just rusty.

At least I’m not coming off the dreaded flu-like symptoms, like Joey Votto is, and who has now come off the field. I hope it’s not swine flu, or rather, H1N1 human influenza, as my son’s little league insisted on calling it when they called off the post-game high-fives to prevent the spread of germs.

The question at the Red Hot Household is how this team isn’t crashing and burning when Dusty Baker is still at the helm. The answer seems to lie in the very good starting pitching, the lack of wily veterans to block the young’uns or, and the small sample size.

OK, quick aside: is it physically possible for Thom Brennaman to be on television or radio for more than 20 seconds without talking about how he doesn’t use Twitter? OK, aside over.

I probably will not last to the end of this game, as dreams of agonizing training to lose 50% of my body weight beckon. But I’ll tune in tomorrow for the first few innings and see if I’ve gotten any of my form back. Hopefully they’ll have a update on Votto by then.

Posted in Random Ramblings.
Comments Off on Staying Awake to See the Reds Play (or Leave the Field Looking Queasy)