Cueto notifies league he will be Cy Young Candidate

Whatever Johnny Cueto did in the offseason, it should be bottled up and sold for massive profits. He appears to be a new man. Last year he was trying to prove he belonged in the major leagues. This year he is looking like a Cy Young winner. Yes, its early, but all hyperbole aside, the one thing that hurt Cueto last year was his high number of base on balls. Lack of command. This year teammate Volquez became the guy who walked too many batters. Cueto is dealing. Right now he easily looks like the ace of the staff. His line: 8 innings pitched, 9 Ks and zero BBs.

Bruce smashed a solo homerun in the second inning and it was an easy ride to victory. Jay looks like the cleanup hitter to me. Sure it means batting consecutive lefties but the fact that Votto is hitting .333 against southpaws makes the decision more palatable. I think we’ll get this lineup thing figured out by mid-June, folks. I really do.

I will give credit to Dusty for having a psychic vision during his sleep. Apparently the lineup card last night had Rosales slotted for #6 with catcher Ramon Hernandez behind him. After his vision Dusty flipped Hernandez and Rosales. The big hit today came from Hernandez, a bases clearing 2 out single.

Dusty resisted abusing Cueto this early in the year by sending him out for the 9th. Instead he sent in Old man Rhodes who pitched a scoreless inning for the hold. He is on pace to pitch about 100 frames this year. That’s approximately the same number of innings he pitched from 2006-2008 combined. If his arm doesn’t fall off by August the Reds have a good chance of making the playoffs.

By
Cincinnati Reds Video Poker
Posted at 11:57 am

It could be worse. It could be better. Considering the relative youth of this team, we’ll take it. The Reds finished the first month of the 2009 campaign with a winning record, 11-9. The offense was downright pitiful most of the way but they found a way to get it done anyhow. It wasn’t exactly pretty, and we can’t exactly call this bunch gritty, but at the same time they have a chance to make some noise this season. 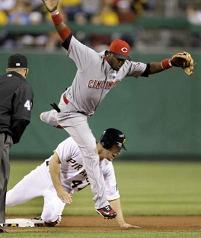 A new month is underway. Yesterday’s 8-6 loss to the Pirates revealed a few glaring holes in the armor. Micah Ownings, while a talented young man, is not providing consistency in the #5 spot of the rotation. He went 5 2/3 innings, allowing five runs on nine hits. Four of the runs and four of the hits came in the first inning.

We know he can hit and we know he is capable of pitching well, but is Owings capable of winning more games than he loses? With Mike Lincoln showing no ability to get hitters out, and fellow middle reliever Jared Burton struggling as well, is it maybe time to move him to the bullpen opening up a spot in the rotation for Homer Bailey? Bailey pitched a shutout for Louisville yesterday, incidentally. Sort of ironic that he is on the same schedule as Micah Owings, don’t you think? Is Dusty Baker capable of utilizing Owings in a pinch-hitting/middle relief role or is that just too confusing? Think of the perplexing double switch possibilities.

The Reds were clearly out-havoc’d yesterday. They had a whopping season high 17 baserunners but didn’t steal a base, stranded 11 runners and relied on the long ball for 4 of their 6 runs. Meanwhile the Pirates and Nyjer Morgan were flying around the basepaths and manufacturing runs with ease. The final Pirates run was scored when Morgan went to third from first on a wild pitch and came home on a sac fly.

Willy Taveras has looked surprisingly good at the plate this year. But where are all those steals he was promising? He has 5 so far, which isn’t bad, but it hasn’t been a major element of his game either. The simple truth is that we are losing the battle on the basepaths because other teams are taking advantage of Ramon Hernandez’ inability to throw out runners. Hanigan is much better at throwing runners out but he has become Bronson Arroyo’s personal caddy and not much else this season. Was it wise for a team that wanted to win with speed to make itself susceptible to speed by trading for a weak-armed catcher?

The defense has not shown marked improvement despite the departure of scapegoat Adam Dunn. Yesterday Phillips made a couple of costly miscues. Votto has been shaky at first base. Dickerson is a disaster in left. Gonzo had a costly error on a would-be double play ball in week 1 versus the Mets. Definitely an area of concern for a team that wants to win via small ball tactics.

The batting order makes no sense. The #2 spot and #4 spot have been a glaring problem from the beginning. Dickerson did not pick up where he left off last year… but was he given a fair shake? Jerry Hairston Jr. started in left field on opening day in lieu of Dickerson. Dickerson saw very limited action for the first couple of weeks as Dusty protected him from left handed pitching. It was no wonder he pressed when he finally cracked the lineup. He looks like he is headed back to Louisville for a tune-up.

Hairston Jr. who is one of Dusty’s favorites has gotten a lot of playing time for someone with a career average of .258 He is a utility player by trade, but in Baker’s deluded world Hairston is a semi-starter who bats at the top of the lineup. He is a streaky hitter that hurts the team when he is in a slump. Same can be said for Brandon Phillips who has been locked into the cleanup spot since last year despite mediocre numbers in that role. Clearly he is mis-cast and it seems to be affecting his all-around play as he repeatedly fails to run hard on the basepaths and make routine plays in the field.

The bright spots so far are Joey Votto, Willy Taveras, Jay Bruce, Johnny Cueto, Laynce Nix, Adam Rosales, and the bullpen combo of Weathers, Rhodes, and Cordero. I am sure most fans would like to see Nix and Rosales receive more playing time. In limited action they have both proven to be tough outs. I think nothing summarizes this season better than when Dusty Baker was asked a couple weeks ago about the possibility of bringing up hot-hitting Adam Rosales because the offense was struggling so mightily. Dusty’s flippant response: “Where would he play?” At the time 3/4 of the infield was hitting below .200 as was the left fielder and primary utility player (Hairston). If Dusty can’t figure out how to get a hot bat into a lineup littered with struggling hitters then what hope do we have that this team can contend?

By comparison, Tony LaRussa pulls rabbits out of his hat every season. Right now Kyle Lohse is one of the best pitchers in the league and guys like Ludwick, Schumaker, Duncan, Rasmus, and Thurston are solid contributors. Who are these guys? A year ago I didn’t know who any of them were. If you look at the Cardinals roster you would be hard pressed to find a single player slumping. Jason LaRue, a self-proclaimed slow starter from his days with the Redlegs is hitting a whopping .455 for the Redbirds. Sure he only has 11 at-bats but the point I am making is everyone on the Cardinals is contributing positively which is why they are 9 games over .500.

Do you think LaRussa would have a problem finding at-bats for a player like Adam Rosales who was raking all spring long? What kind of message does it send to the team when the best player in Spring Training is sent down to work on some things? Obviously the blame is not entirely Dusty’s; Walt Jocketty is the GM, but you have to figure if Dusty wanted Rosales he could have had him. Instead he told the beat writers that “I told him to slow down the game. I don’t want him to slow but slow down the game.” Apparently it is not enough to simply hit for high average and slugging percentage. You are also expected to be mentally adept at quantum physics. Adam has dutifully been staying up late at night with his slide ruler trying his best to bend the fabric of reality.

So that is the state of the Reds as of May 3rd, 2009. This is a team on the cusp between good and bad. Anything can still happen and there are enough bright spots that you can’t help but feel somewhat optimistic. I think Chris Sabo’s Goggles says it best: “It’s Probably Gonna Happen (Maybe).”