Did That Really Just Happen?

A little part of me thought that there was no way the shutout would last, or at least that the last at-bat would take 25 pitches. But no. 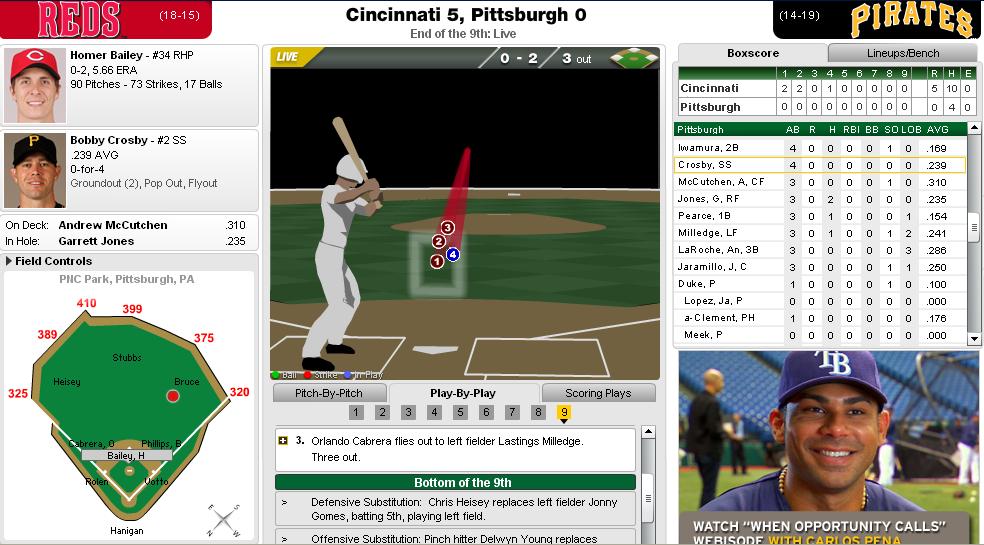 This is a freakin’ hot team, and after an off-day tomorrow, they’re going to have a well-rested bullpen for the Cards. Ought to be a hell of a game.

The Daily Brief: Hoping to Return the Sweeping Favor

Last Game
Johnny Cueto pitched the best game by a Reds pitcher this millennium last night when he shutdown the Pirates for 9 shutout, 1-hit innings. It was a sight to behold, not that you would know it from Reds TV broadcaster Paul Keels’ flat, emotionless delivery. The guy would have trouble making the first human walking on Mars sound exciting.

Next Game
Assuming the rains stay away, the Reds will go for the sweep of the Pirates this afternoon. That would be nice retribution for when the Pirates swept the Reds earlier this season. Homer Bailey hopes not to be a starting pitcher combo breaker as he faces Zach Duke at 12:35pm EDT.

Heisey’s Night Overshadowed
Dusty Baker has few options at the lead off spot, and with both Drew Stubbs and Orlando Cabrera getting a game off–Paul Janish started! Can you believe it!–Baker turned to rookie Chris Heisey. Heisey had no hits in 7 at-bats going into last night’s game, but Baker’s move paid off. Heisey had his first hit and later, his first home run. If Cueto hadn’t been so magnificent, everyone would have been talking about Heisey. As it is, his performance gets overshadowed a but.

Reds beat reporter John Fay helps in that regard, though. Heisey had an amazing game, but neither his mother or father were present to see it.

Chris Heisey got choked up in the ninth inning Tuesday.

He had just hit his first big league homer. He had taken the field for the ninth when he thought of his father, Craig, who died in October of 2007 of Lou Gehrig’s disease.

Here’s to many more games like last night for Heisey.