Wow. Two games in a row that weren’t worth staying up until tomorrow for. Thank goodness I didn’t.

The San Francisco Giants again beat down the Cincinnati Reds, hard and fast. This time Travis Wood was the starting pitcher to get rocked. He did last quite a bit longer than Volquez did the night before, but it was still a horrible outing, with 7 earned runs over 4 innings. Mike Leake made his second relief appearance and was also terrible, and did nothing more than supply the Giants with brass knuckles. Over 1/3 of an inning, Leake allowed 6 runs on 6 hits, 2 of which were home runs. The outing was so bad that there’s now talk of shutting him down for the season. Recent callup Sam LeCure got in on the run-allowing action, too, giving up 3 in his 3 innings. Only Nick Masset showed competence last night.

Well, that’s not entirely true. The offense was solid. At least, I think 5 runs is a good showing. Heck, they scored 3 to get within 2 in the 5th before Mike Leake came in. In the 5th, Brandon Phillips hit his second solo shot of the evening. Then a few batters later, Scott Rolen launched a two-run home run. That was all for the rest of the game. I imagine the massive amounts of runs the bullpen was leaking didn’t provide much incentive to score.

This marks the first series the Reds have lost since being swept by the Cardinals. The good news is that this road trip had just one game left, the Reds will have a winning record on it, and that they will return home in first place. The season isn’t over; the Reds have simply had 2 bad games in a row. It happens, and if past performance is any predictor of the future, then this team will bounce back. And hopefully, it’ll be today.

Last Game
I hope you didn’t stay up late for last night’s game. It wasn’t pretty. Edinson Volquez couldn’t get out of the first inning, and the bullpen was never able to stop the blowout. In addition, Laynce Nix sprained his ankle and Jim Edmonds strained his right oblique. All in all, an ugly 11-2 loss.

Next Game
It’s game 2 of the series against the San Francisco Giants. The Cincinnati Reds have secured a winning record on this West Coast trip, but it would still be nice to take the series from the Giants. They have to win today to do that, and they’ll be sending out Travis Wood. The Giants counter with Jonathan Sanchez. Game-time is 10:15pm EDT.

Extending Baker One Year at a Time
Some more details have come out about the extension the Reds have offered Dusty Baker, primarily that it’s only for one year.

Dusty Baker is prepared to take his time weighing an offer to manage the Reds again next season.

The Reds have offered Baker a one-year contract extension for the 2011 campaign, but he has yet to give the club an answer and certainly wants to weigh his options.

Many managers are retiring after this season, so the article posits that Baker may have other suitors. It would make sense for him to see what other interest there is, and I wouldn’t hate for the Reds to lose him. Winning clears up a lot of things, but even so, Baker’s managing can still annoy and possibly rob the team of a few wins that a more modern manager wouldn’t.

The one-year offer is a prudent strategy, though. Don’t forget that the Reds were losers for the first 2 years under Baker.

What to Say to Sound Smart at the Water Cooler
In the final game of the Los Angeles Dodgers series, Bronson Arroyo picked up his 100th career win. He is 100-90 for his career. 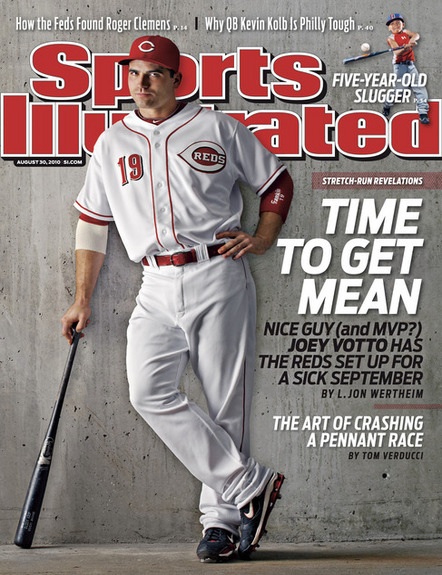 Yesterday, the St. Louis Cardinals lost their 5th game in a row. And from a distance, it does have the feel of a spectacular implosion. Tony LaRussa’s losing his cool and bitching and moaning about the strike zone.

“We had a great chance in the ninth, and MLB can go ahead and fine [me], I don’t care, but there were several strikes a guy as good as Brian Wilson got, he doesn’t need. Who knows how that inning would have been? You know they are supposed to review that stuff and they are supposed to fine you if you say anything about it, but that is just not right,” said LaRussa.

I can understand his frustration at losing. But can you imagine Albert Pujols? Viva El Birdos attempts to, taking into account the recent acquisition of Pedro Feliz and the end of Pujols’ contract after the 2010 season.

what on earth do you think albert is thinking as he looks around the infield and sees pedro feliz at third, felipe lopez at short, and aaron miles at second? “i have arrived in the eighth circle of hell” [except in spanish]?

i guarantee that it is not: “i should sign a below-market value contract for the next eight or so years so that i can ensure that this continues to happen to me.” [except in spanish]

Tonight the Cardinals are sending their best–and bitchiest–player, Chris Carpenter, to the mound to attempt to stop the losing. But the San Francisco Giants are sending out Tim Lincecum. The game is on the MLB network now in many areas, including mine. I would recommend tuning in, for the bitching and the good baseball.