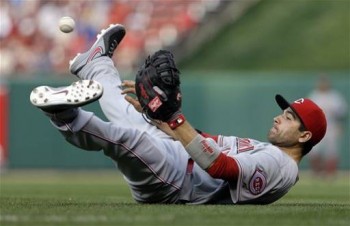 Last game
To look at a final score of 13-4, you wouldn’t think that the Reds trailed almost the entire game. The Cardinals took a 0-2 lead at their very first opportunity, and the Reds didn’t manage to tie it up at 4s until the 8th. And then, lo, the 9-inning 9th. That was really something to see.

Shin-Soo Choo was the big story, having committed both of the team’s 2 errors that allowed 3 runs. But then he also led the team in RBI this game with 3, so it was a wash. Jay Bruce went 4-for-5 with a walk, an RBI, and 2 runs scored. Brandon Phillips got booed a lot and also hit a home run. Joey Votto went 1-for-4 with 2 walks, an RBI, and 2 runs scored. He’s certainly not looking like his old self, but I bet it messes with your pitch-o-vision to see so many balls go by.

This game was too massive to be properly covered in brief, so I recommend you go check out the game wrap.

Next game
You mean we get to do this again??

Tribute For Heroes campaign
I got a rather dense press release in my inbox the other day:

Major League Baseball and PEOPLE magazine today announced the “Tribute for Heroes” campaign, a national initiative that recognizes veterans and military service members and builds upon both organizations’ commitment to honoring our country’s heroes. Beginning today and running through May 17th, fans are encouraged to visit TributeforHeroes.com to nominate an active or former member of the Armed Forces of the United States or Canada for the chance to represent their favorite MLB team at the 2013 All-Star Game.

Once all the nominations are reviewed, three veterans/military service members per Club (90 finalists) will be selected by MLB, PEOPLE, and a celebrity panel of judges, who will be announced at a later date. Fans will then be encouraged to vote online from June 9th through June 30th for their Club favorite. All 30 winners, one representing each MLB Club, will be announced on July 10th. They will be included in All-Star Week festivities and recognized during the All-Star pre-game ceremony leading up to the 2013 All-Star Game at Citi Field on July 16th on FOX. A “Tribute for Heroes” winner will be featured in PEOPLE magazine the week of the MLB All-Star Game.

The “Tribute For Heroes” campaign will support Welcome Back Veterans (welcomebackveterans.org, powered by MLB.com), an initiative of Major League Baseball and the Robert R. McCormick Foundation, which addresses the needs of veterans after they return from service.

Nominate your hero at TributeforHeroes.com

What to say to sound smart at the water cooler
Shin-Soo Choo committed only 2 errors in all of last year when he was playing right field.

Posted in Daily Briefs.
Comments Off on In brief: Reds drop 9-run inning on Cardinals