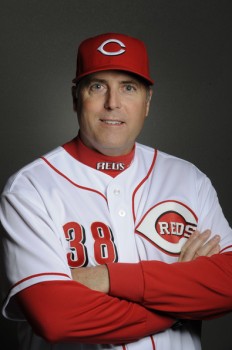 Bryan Price has been the pitching coach for the Cincinnati Reds since taking over for Dick Pole in 2009.

Long gone are the days when the Cincinnati Reds had a rotation of Aaron Harang followed by pray for rain. No, now each day brings with it confidence in whoever the Reds have starting that day. That transformation is due, in large part, to pitching coach Bryan Price.

The Cincinnati Enquirer ran a profile on him over the weekend.

Detailing his accomplishments with the Reds, the article notes that in his first three seasons the Reds ranked seventh, 12th and third in team ERA. Prior to his arrival, the Reds were often seen in the middle of the pack, if not worse. Last year was arguably the team’s best pitching performance in the history of the franchise. In addition to finishing third in team ERA, the team set a record for the total number of strikeouts with 1,248, finished first in the Major Leagues in relief ERA (2.65) and saves (56), first in the NL in opponents’ BA vs relievers (.219) and fourth in the NL in starters’ ERA (3.64). Not to mention none of the starters missing a single regular season start.

Yeah, the guy’s good. But what makes him so effective? What’s his approach

“It’s very similar to what everyone else talks about: Being aggressive, working ahead and staying ahead in the count, composure, preparation and accountability,” he said. “The last one is the hardest. When you don’t succeed, it’s hard to own your own failure and not look for other places to blame.

“That’s real hard. Character is hard to find. We really try to make sure the starters understand their obligation to pitch innings. That’s one thing we’ve impressed upon them wherever we’ve been. Relief guys aren’t supposed to be in 80 games a year. And when they are, it’s because the starting rotation isn’t getting the job done.”

Homer Bailey has high praise for Price, crediting him with not only finding problems but having plans on fixing the problem. And given Bailey’s rough time at the beginning of his tenure as a Red, that’s saying something. Bailey seemed close to un-coachable his first couple years. That’s changed, and everybody’s happy with Bailey’s improvement.

And to think, the team was close to losing him. Lest you forget, in the off-season Price was considering interviewing for the Miami Marlins job. Given the ineptitude of the Marlins team that just lost 3 of 4 to Cincinnati–and were very close to being swept–I have to think Price feels he made the right choice.

I know I’m happy he signed that extension. As awesome as Shin-Soo Choo has been in this first month of the season, retaining Price as the pitching coach is the most important move the Reds made during the off-season.