Injuries, the Reds, and the unluckiest team in the NL Central 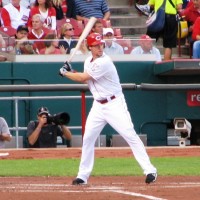 Ryan Ludwick attempting to drive in a run in his healthier days.

With the minor injuries to Zack Cozart and Jonathan Broxton recently, I started thinking about how injury prone the Cincinnati Reds have seemed so far during the 2013 season. So I loaded up a list of all the injured players across Major League Baseball to compare the Reds to their National League Central opponents.

The Milwaukee Brewers have been the unluckiest, with seven players on the disabled list. The Chicago Cubs are next with six, the Reds have five, and the Pittsburgh Pirates have four. That leaves the St. Louis Cardinals as the healthiest team, with just three players on the DL.

The Brewers have been hit the hardest by far, with two players out for the season. Aramis Ramirez, Mark Rogers, and Jeff Bianchi are on pace to be back in the next few weeks, but Corey Hart and Chris Narveson aren’t expected back until May.

None of the Cubs players are listed as being out for the entire season, but they are the Cubs. Historically, no one is as unlucky as them.

That brings us to the Reds. Like the Cubs, no one is out for the year, although at this point it’s easy to wonder if 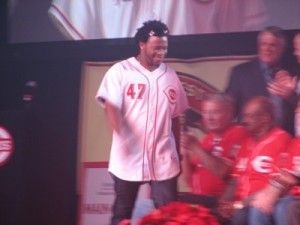 Nick Masset will ever pitch again. He hasn’t pitched since 2011. Ryan Ludwick is the most severely injured and isn’t expected back until the All Star Break. The rest–Sean Marshall, Johnny Cueto, and Ryan Hanigan–are all expected back in May.

The Pirates have been healthy during the season. All of their four players started the season on the DL.

The Cardinals are similar to the Pirates. Two of their three players were placed on the DL during spring training. Those two–Chris Carpenter and Rafeal Furcal–were big potential parts of the team and will be missing the entire season. Jason Motte is the only one to be injured during the season.

Overall, the Reds seem to be in the middle of the pack. Sure, all but one of their disabled players have occurred in the first month of the season. But with the exception of Ryan Ludwick, those injuries appear to be minor and the players are expected back in May. Assuming the rash of injuries stops, then the earliness of the season almost insures that these injuries won’t have a major impact on the team’s overall performance.

Posted in Cincinnati Reds, NL Central.
Comments Off on Injuries, the Reds, and the unluckiest team in the NL Central

In brief: Izturis is hero against Cubs

Last game
The Cubs were 5-12 when they rode in to Cincinnati for last night’s game, but it still took the Reds 13 innings to beat them. The Cubs got to Mike Leake early on and had a 2-0 lead by the middle of the third. Jay Bruce led off the seventh with his first home run of the season, which was followed up later by Jack Hannahan tripling in Chris Heisey to tie it up. But regulation play wouldn’t be enough to break the tie.

I started drifting in and out of sleep around the eleventh. When Luis Valbuena hit a 2-run bomb off Alfredo Simon in the top of the thirteenth, we finally decided that sleep was more important than the game. It was our loss, though, because Xavier Paul singled, Brandon Phillips doubled, Jay Bruce doubled them both in to tie it up, and finally Cesar Izturis singled in Bruce to put this one in the win column for the Reds. This is just one of the many high-quality visions of things Joey Votto is not paid to do.

More things Joey Votto isn’t paid to do
Considering that Jay “The Streak” Bruce got his first home run of the season last night but it was his double that tied up the game in the thirteenth, it might be a more interesting question to discuss what Bruce is or isn’t paid to do. But that’s just not the name of the Tumblr.

If you haven’t been out to Things Joey Votto isn’t paid to do today, you’ll want to check in one more time before you forget what it was ever in reference to in the first place.

There are 8 new posts today, including 6 hilarious photoshops donated by Lion_Hanigan. She does photoshops like these every Wednesday, so check it out and if you like what you see, give her a follow.

What to say to sound smart at the water cooler
Johnny Cueto started throwing again yesterday, and he’s reporting no pain from the strained lat that put him on the DL. Sean Marshall is also coming along; he pitched one hitless inning with AAA Louisville last night. He struck out 2.

Posted in Daily Briefs.
Comments Off on In brief: Izturis is hero against Cubs