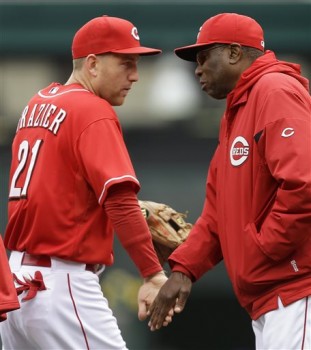 Frazier’s home run wasn’t just a total bomb at 480 feet, it was also the only run scored by either team. (AP Photo/Al Behrman)

Last game
The Reds won the day game to take the series from the Cubs. Mat Latos was great. Todd Frazier hit a 480-foot homer. The baseball gods were just generally smiling. Read the whole game wrap, complete with pictures of a sad Cub!

Next game
Tonight the Reds head to Washington DC to visit the Nationals. Bronson Arroyo (RHP, 2-1, 3.54 ERA) will be going up against Gio Gonzalez (LHP, 1-1, 5.85 ERA) at 7:05 p.m. Gonzalez was the victim of a big inning against the Mets in his last outing, so this could be a good chance for the Reds to find their bats again.

20,000 days since Frank Robinson’s big clutch day
Theoretically, at any given point in a game, a team has a certain chance of winning. And each action that a player takes can increase or decrease that percentage chance. When a player does something to increase the team’s chance of winning, he increases his Win Probability Added (WPA) stat.

20,000 days ago, Frank Robinson played the game in which he racked up the highest WPA of his career. It involved extra innings and come-from-behind walk-off awesomness. Check out a detailed retelling of the tale on The Hardball Times.

Posted in Daily Briefs.
Comments Off on In brief: Reds take 8 of 10-game homestand

The Reds took the game and the series from the Cubs yesterday, but just barely.

Mat Latos was great and finally got a win for his efforts. He put in 7.0+ innings and allowed 0 runs on 4 hits and a walk. One of those hits and the walk were to the first two guys he faced in the eighth, though, so it was a good time to bring in Jonathan Broxton for three quick outs. Aroldis Chapman took over for the ninth and allowed a hit before closing it out for the save.

The pitchers were backed up with some good defense, of course. Those among us who weren’t so sure about Shin-Soo Choo in center field were all ready feel vindicated when the Cubs’ Anthony Rizzo did this:

And sent one to deep center field, only to see this: 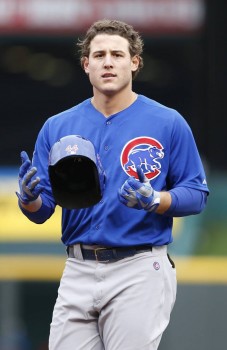 Rizzo looks like of like Ryan Reynolds when he’s disappointed. In fact, he lined out to Choo 3 times yesterday.

On the other side of the innings, the Reds’ only run came from a 2-out solo shot by Todd Frazier in the sixth inning. Choo went 2-for-4 to drag down his OBP a little. Zack Cozart, Joey Votto, Jay Bruce, Devin Mesoraco, and Latos also contributed hits that didn’t end up coming to anything. Votto was caught stealing for the first time this season in the first inning. Joey Votto is not paid to get caught stealing.