The Reds fell to the Devil Rays today to the tune of 7 to 5 in Sarasota.

Phil Dumatrait started for the Reds and gave up just a home run over two innings of work. Jimmy Journell was sound in his scoreless inning. Bubba Nelson, unfortunately, gave up four runs on five hits in less than an inning. The Reds also ran out Ben Kozlowski, Chris Michalak, Chris Hammond, Jason Standridge, and Todd Coffey.

Meanwhile, manager Jerry Narron was quoted expressing his displeasure with the pitching performance so far this spring training:

“Everyone thinks our club is set, but we’re begging for somebody to come out there and step on the mound and dominate the game,” he said. “Right now, I’m looking for guys to get in the game and throw strikes, command the baseball, not pitch from behind, not miss by three feet – miss by three inches.

I don't think it's a coincidence that Narron starts talking about how the pitchers need to step up, and then we see a parade of pitchers. According to Marty and Joe on the radio today, the first cuts are coming Thursday, and they're going to be big. Narron's giving them all one last chance to come in and dominate.

Tomorrow the Reds host the Phillies at home at 1:05 p.m.

Reintroduction of the Human League

Early last season, I began a category here on Red Hot Mama called Human League. Here's what I had to say about it at the time:

There are lots of valid ways to enjoy a baseball game. It seems like the current trend is toward the statistical approach to the game, where every person, park, play, and match-up is an equation to be solved; an element to be added to the set. While I agree that a good rigorous workout of a mathematical matrix can be a fascinating exercise, for me, nothing compares to the human experience of the settings, characters, and real-life drama that unfolds over the course of nine innings.

I wouldn't say that it's a womanly approach to baseball; it's a human approach to baseball, so called because it puts humans first. Still, I suspect that most women would approach it that way, if they were approaching the game at all. Unfortunately, the priority of Major League Baseball doesn't seem to be attracting the woman viewer, though I think there's a lot for women to enjoy, and it really would be a healthy shift for the game. The human approach doesn't encourage strikes, steriod use, or an enormous economic divide between large and small markets.

But while the statistics fanatics can turn to newspaper, Web sites, entire communities to contribute more data to the number-crunching they find so engaging, where can I go to learn more about the personalities that engage me in the game? Bits and pieces from the odd human-interest baseball newspaper article, the goofy television pre-game time fillers, and mostly my own careful observation of the way a player moves, the expression on a coach's face, the words between the words of the prevalent sound bites.

And so, Red Hot Mama was born. Providing a fun and irreverant view of the characters of the Cincinnati Reds is the primary reason for her creation. Well, maybe secondary to giving me a place to stretch my ego by being a smart alec in a public forum. And, to be honest, all purposes are subsidiary to the distant possibility that the blog could be noticed and fully financially backed by some billionairre benefactor. But since I don't see that one happening any time soon, we'll bump the promotion-of-the-human-approach back up to second. Second ain't bad.

To that end, I'm introducing a new category called Human League, where I will go on to some length about the parts of the game that I think are important. Possibly, no one else in all of Reds' cyberdom will agree that it's at all interesting, and I'll be shunned and laughed at. Or maybe I'll get picked up and backed by the Lifetime network.

If nothing else, it ought to be a fascinating exercise.

Noble as those goals were, I just couldn't seem to get the format to work for me, so after a few profiles, I gave up.

But now, thanks to my crack technical staff, the Human League has enjoyed a promising change of format. I'll be posting links to the new content as it's ready, the first two being descriptions of the two player nicknames that I take credit for:

Suggestions for Human League (and all) content are always welcome. Feel free to drop me a line at [email protected]-hot-mama.com

With Adam Dunn moving to first base and rumors swirling about trading Austin Kearns, how do you feel about your chances for becoming Cincinnati’s next big outfield heartthrob?

And it’s really true. If you look at the photos of Denorfia, he looks kind of goofy, but this last year he’s really started to fill out and he’s getting downright dashing. I think he’s a shoe-in for outfield heartthrobâ€”if he can just make the team.

With Adam Dunn moving to first base and rumors swirling about trading Austin Kearns, how do you feel about your chances for becoming Cincinnati's next big outfield heartthrob?

And it's really true. If you look at the photos of Denorfia, he looks kind of goofy, but this last year he's really started to fill out and he's getting downright dashing. I think he's a shoe-in for outfield heartthrob—if he can just make the team.

Posted in Uncategorized.
Comments Off on Nickname: Heartthrob 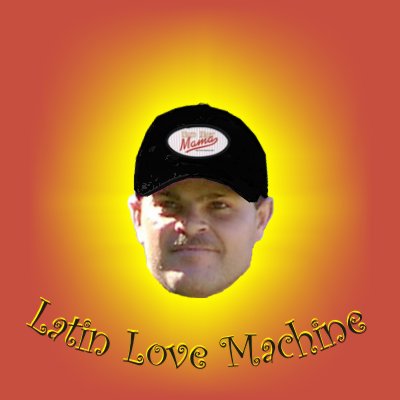 I’m proud to take credit for first calling the Reds’ backup catcher the Latin Love Machine back on May 27, 2005. In fact, I would call it one of my proudest moments of my blogging career.

Not long after I began referring to Javier Valentí­n as “The Latin Love Machine” (or LLM for short), he began that offensive tear that all Reds fans are so familiar with now. At the time of this writing, just before the start of the 2006 season, the LLM is still demonstrating prime form. He was named the MVP in the Puerto Rican championship series and has been named to the Puerto Rican WBC team.

Since its inception last May, the phrase “Latin Love Machine” or “LLM” has popped up on Reds blogs and message boards across the Internet to refer to Valentí­n. Next, I hope to convince the Reds radio and television announcers to use it, followed by ESPN, and ultimately, the Reds media guide.

Posted in Javier Valentín.
Comments Off on Latin Love Machine