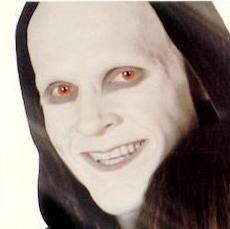 This week on the podcast I talk with Kurt Evans, a.k.a. Death of the Chicago Cubs blog Goat Riders of the Apocalypse. If you haven&apos;t made it over there, I recommend it. Kurt puts together some seamless photoshops that never fail to amuse.

On the podcast we talk about:

We wrap up the program with 30 seconds of Ryan Adcock&apos;s song Wire to Wire, one of the tracks from Cincinnati Clutch Hits.

Posted in Podcasts.
Comments Off on Episode 18: How’s It Hanging, Death?

Oh happy day! The Reds put the smack down on the Braves in the second inning for the big cathartic 10-5 win last night.

Eric Milton was rotten, allowing five runs (all earned) on six hits and two walks through six and one-third innings. Milton was so solid there for a minute, but he gives up a couple homers and now it seems like he's resigned himself to his former infamy. Can someone get his head on straight, please?

David Weathers took over in the seventh and eighth. He allowed--you might want to sit down for this--ZERO runs on two hits. Holy David Weathers! Eddie Guardado finished it off, putting up a hitless ninth.

What a night, what a night. Ryan Freel went 3-for-4 with a walk and a run scored. Adam Dunn and Rich Aurilia each had two RBI, but only one of them did it with the home run. Dunn's came on a single in the second inning with runners in scoring position. Again: holy David Weathers!

There are so many people to thank, I'm sure I'm going to miss someone. Thanks to Jason LaRue for pinch running (and later contributing an RBI) when David Ross pulled his abdominal muscle and had to leave the game. Thanks to Dewayne Wise for taking over for Ken Griffey, Jr. when the risk of letting him play outweighed the potential benefit of having him in the line-up. Thanks to Brandon Phillips for being his spunky self. Thanks to Austin Kearns for being easy on the eyes.

The win brings the Reds' record to 45-42 and finally breaks that season-high six game losing streak. Tonight we send Aaron Harang out to deal with John Smoltz at 7:05 p.m.