Before Wayne Krivsky had a chance to make the horrible mistake of re-signing Royce Clayton, the Blue Jays beat him to the punch. Marc says:

Ken Rosenthal reports the Blue Jays have agreed to a one-year, $1.5 million deal with Royce Clayton.

This is the exact transcript of the conversation that ensued here in the office between me and the Crack Technical Staff regarding this story:

To be paid in maple syrup and snow.

Posted in Wheeling and Dealing.
Comments Off on Krivsky Avoids Making A Bad Move

Cardinals Actually Do Something

As in in direct response to me making fun of their inactivity and certainly not because they were just wrapping up the details, the Cardinals have finally gone and done something:

Adam Kennedy signed a three-year deal on Tuesday to play second base for St. Louis, reuniting him with Eckstein, his old Anaheim teammate.
….
The Cardinals also filled another of the openings on their roster on Tuesday, signing right-hander Kip Wells to take one of the vacant spots in their starting rotation. Wells, 29, was most recently a Texas Ranger but is best known to the Cardinals from four-plus years pitching for the Pittsburgh Pirates.

Wells, a previously good starter down on his luck, going for $4 million. What a shame that he can't catch, or we'd be looking at him in a Cincinnati uniform.

Posted in Wheeling and Dealing.
Comments Off on Cardinals Actually Do Something

From an e-mail from THE Dave Storm, GABP scoreboard operator extraordinaire and front-man for the Screaming Mimes:

Hoo-ya Screaming Mimes fans… hopefully all of your Thanksgiving leftovers have been consumed and you're hopelessly optimistic Amazon Christmas Wish List is updated… now on to more important things.

Redsfest is THIS FRIDAY & SATURDAY December 1st & 2nd. We play the really big show Friday at 8:00 PM. And now you can win 4 tickets to Friday's Redsfest - which means free access to the concert!

To enter, email us at [email protected] with a really clever limerick, drawing, picture, song, animation - anything that can be emailed - with some reference, either obvious or discreet, to Screaming Mimes by Wednesday the 29th at Midnight. Judging will take place Thursday and you will be contacted immediately to get your 4 tickets for Friday's Redsfest. Please include your phone number and email addresses with the entry. The winning entry will be posted on screamingmimes.com and myspace.com/screamingmimes, along with some of the runners-up that really amuse us.

To find out exactly what's happening with Redsfest, check out www.reds.com/redsfest - all the players, interactives, games, music, etc…

If you haven't checked out www.screamingmimes.com yet, GO THERE NOW and download our FREE GIFT to you - and mp3 of our spunky song “Christmastime”. We only ask that you share it with everyone you can and help spread the love… just use proper protection when you spread love.

Hey, four tickets to Friday's Redsfest is a $40 value. Plus, the honor and glory of the winner coming from RHM is something I'd cherish for at least a couple weeks. 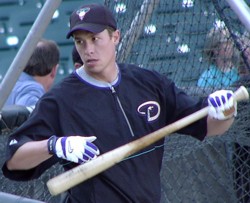