In a story the Philadelphia Inquirer today, Todd Zolecki says that the Phillies are interested in David Weathers:

The Phillies are interested in free-agent righthanders Joe Borowski (3-3, 3.75 ERA and 36 saves with Florida) and David Weathers (4-4, 3.54, 12 saves with Cincinnati) because Gillick would like to have better options should closer Tom Gordon get hurt again.

It's not as stupid as the idea of the Yankees going after Eddie Guardado, but it's still surprising to see the name of any Reds' reliever mentioned.

If only someone wanted Franklin.

This Way They Don’t Have to Talk to Him 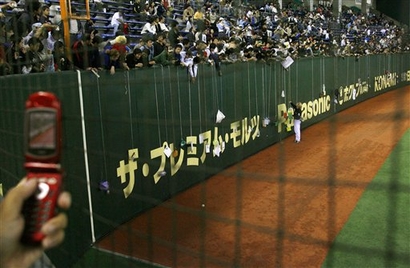 Spectators of the game between the visiting American team and the Japanese All-Star team extend items on long strings for Bronson Arroyo to sign.

I'm offering a free copy of Funnyball and a Reds bumper sticker to anyone in a similar situation who pulls on the string at the last second and yells “Sucker!”

Posted in Random Ramblings.
Comments Off on This Way They Don’t Have to Talk to Him