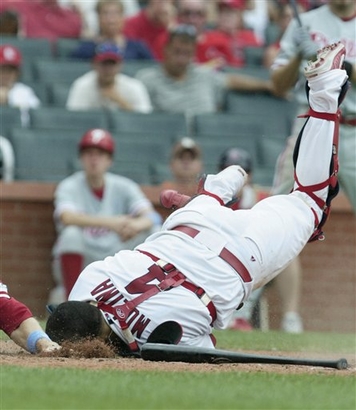 The Cardinals have been hit hard by the injury bug this season. Chris Carpenter has suffered a setback and it looks like he won’t be back now until next season. Adam Wainwright is on the 15-day DL, as is Albert Pujols after suffering a tragic leaving the batter’s box. Latest to join the list of gimpy: Yadier Molina, shown here punishing the ground.

But he got the out. And the smart money says the Cards keep winning anyway.

Posted in Random Ramblings.
Comments Off on Snake-Bit Cards

Homer Bailey started again for the Reds, and as has been his custom, allowed home runs–three of this time–and walked 5 in 2 1/3 innings. The scary part, I think, is that he didn’t strike anyone out. He’s always had issues with control, walking too many and allowing too many home runs, but he always struck out people. Not yesterday.

Obviously, the Reds weren’t going to win. That’s not why they have Bailey in the rotation. He’s there to learn to pitch in the big leagues or die trying. Hopefully, he’ll start figuring things out because this does get painful to watch.

The Reds managed to win one game in the Red Sox series, and sent another one into extras until Dusty Baker lost it for the team. (Memo to Baker: Francisco Cordero > Mike Lincoln.) Despite that, I thought the Reds were greatly outclassed. This team has a long road ahead before they’re a good team. Bailey learning to pitch effectively is but one of many steps along that path.

We’ve all had those weekends, you know the ones. You’re filled with optimism, excited about your prospects, only to have it all come crashing down. That was what happened to Houston.

The Yankees completed a sweep yesterday, winning by 13 and shutting out the Astros. Roy Oswalt did not follow up his last excellent start with another excellent one. He allowed 7 runs over 5 2/3. Of course, 4 of those were unearned, so the defense wasn’t doing him any favors. Still, ouch.

Houston has lost 5 in a row and plunged to 5th place in the division, ahead of the hapless Reds by a half game.

The Astros have today off, hoping that some time spent not sucking at baseball will make them not suck at baseball.