15 things worse than Jay Bruce flipping off his friends

According to Reds.com, Jay Bruce just feels like crap for giving the monkeys in the dug-out the ol’ double-sit-and-spin. Reds.com beat reporter Mark Sheldon hypothesizes that the league will be doling out some sort of prudish justice, though we haven’t heard what fine is in order for being the dummy who forgot your beer league game was being televised.

In honor of this presumed-upcoming self-righteousness, I thought I’d list 15 things the Reds, Major League Baseball, the player’s union, or anyone suckling off the teet of Big Baseball have done that have been the equivalent of flipping the bird at the fans, but that have managed so far to go unpunished: 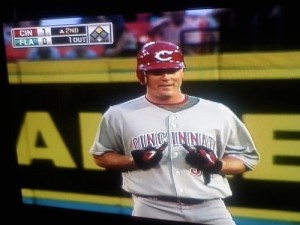 Thanks, Deadspin. Love ya!

Posted in Random Ramblings.
Comments Off on 15 things worse than Jay Bruce flipping off his friends

The Daily Brief: Rolen Into Florida

Last Game
Scott Rolen provided the offense for the Reds, hitting two home runs and driving in the go-ahead run–Joey Votto, on thanks to a walk–in the 10th. The Reds won their first game against the Marlins, and move to above .500 for the first time in 2010.

Next Game
Bronson Arroyo starts tomorrow against Nate Robertson. Game-time is 7:10pm EDT, and the game will be available on FSN-OH, MLB Network, and 700 WLW.

Reds Seem Similar to 2009 Squad
Remember last year when the Reds had good pitching, good defense, and about the worst offense in the majors? Remember what the team did to address that in the off-season? Yeah, not much of anything other than hoping the youngsters grew and improved. Already this year, familiar trends are emerging.

The starting pitching has been solid, with a 3.11 ERA, good for third in the National League. Meanwhile, the team’s offense ranked 12th in both batting and runs scored.

Dusty Baker’s not worried, which is good. Since he’s not the General Manager, he can’t bring in a power bat. He might have a say in not placing a player who loves making outs in the 2nd spot in the order, though.

What to Say to Sound Smart at the Water Cooler
Johnny Cueto struggled for the Reds in his start yesterday. He’s only 24, but has already made 63 career starts.

There is one winless team left in all of Major League Baseball. Can we all take a moment to reflect and be thankful that it’s not the Cincinnati Reds?

Somehow, it’s not even the Pittsburgh Pirates. No, this year’s unlucky out-of-the-gate team is the Houston Astros. They were swept by the Giants to open the season. After that, they ran into perhaps the best team in the national league, the Phillies, and were swept by them. Yesterday, they started a series against the St. Louis Cardinals, so a win any time soon isn’t looking too promising.

It was the Cardinals’ home opener, and they had Adam Wainwright starting. The Astros never had a chance.

Albert Pujols–of course–was the offensive star for the Cardinals, driving in 4 and going 2 for 3 with his 5th homer of the year. Wainwright was brilliant, allowing no runs and striking out 7 over 8 innings. And he needed just 105 pitches to do it.

The Astros’ punch-less offense managed nothing. Zilch. They were held scoreless and had just 7 hits scattered throughout the game.

Wandy Rodriguez struggled in his start for Houston, allowing 4 runs in 4 1/3 innings. With the exception of the bullpen, the Astros truly displayed a team effort in their loss.

The Astros best chance for their first win may not come until this weekend when they face the Chicago Cubs. If not then, well, they play the Nationals at the end of May.