I don’t know if the Reds are going to wait out the end of Dusty Baker’s contract, extend him, or cut it mercifully short, but it’s been a constant source of discussion lately, and apparently even on Baker’s own mind. From Ken Rosenthal at FoxSports.com (HT Rocktman):

Reds manager Dusty Baker asked management about a contract extension, according to a major-league source, but evidently the team is not yet ready to decide upon his future.

Baker, in the last year of his deal, could be replaced if the Reds continue to flounder.

What I do know is that I was taken by surprise when the Reds hired Baker, and I don’t want to again find myself in the position of coming to terms with a new manager before I had a chance to talk about my needs. Baseball *is* all about my needs, after all.

So today I’m beginning with the first in a five-part series about what I see as the requirements for a manager of the Reds. Hopefully someone in the front office will hear my prayers and find a candidate that matches my exacting specifications, just like they did in Mary Poppins.

These requirements are generic and are not intended to endorse or condemn any particular candidate. Any resemblance to the opposite of any current manager are purely coincidental.

Requirement #1: Open Mindedness
I think a good manager should be open-minded about evaluating performance and deciding courses of action. A person who stubbornly insists that “his gut” or “his stats” or “his tarot cards” is the only source of information worth paying attention to is limiting himself unnecessarily.

Beware of managers who try to assess talent based entirely on facial structure, as well as those who have never looked up from the spreadsheet long enough to notice the player’s face.

Interview questions to ask to check for Open Mindedness:

Question: Tell me how you construct a line-up.

Good answer: I’ll consider numbers like OBP, though I also like putting my faster guys near the top and taking the pressure off the new guys by putting them down a little lower.

Bad answer: Well, everyone knows that it has to start with CF, then SS, regardless of the kind of hitter they are or how they’re doing.

Tune in tomorrow when we talk about the benefits of hiring a former crappy player to be your manager.

Posted in Random Ramblings.
Comments Off on Manager Job Description: Part 1 of 5

Off-Days Make Me a Sad Manda 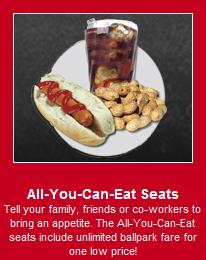 The Reds are traveling to Houston and are apparently too jet-lagged from the one-hour time zone difference to be able to take the field today. Normally, Monday nights are when we take in the Indianapolis Indians (and their Monday night dollar menu), but alas, they are visiting the fine town of Louisville where Travis Wood has held them scoreless over 3.

Wherever shall I get my baseball fix today?? I contemplated staring at my wallpaper for three hours, but I decided that might make me a little creepy.

Instead, I checked out the email being sent to me by the Reds. Today they are advertising that the Cubs are coming to town May 7-9, and May 8 will be team photo day. As an added bonus, they want to remind me that there is an All-You-Can-Eat section in the ballpark, where you can bring your friends and loved ones to gorge themselves on hot dogs, peanuts, and…medical waste?

Maybe I’ll check out the blogs. Slyde has written a tome about Aaron Harang’s pitches, but at least it’s got more pictures than my Operations Management homework, which is what I’m ultimately trying to forget exists with this rambling.