When is a 6 run lead not enough? When you’re the Cincinnati Reds and you’re mired in your worst losing streak of the season.

One would think that with the way the offense exploded against the Dodgers, that maybe the pitching could step it up. But no. The starting and relief pitching continue to be black holes for the Reds. For one night, at least, the offense wasn’t.

Homer Bailey started for Cincinnati, and allowed 3 before his team had even batted. But the offense batted around in the 2nd inning, scoring an unprecedented 6 runs, only 1 from a homer. They added 3 more runs over the next 2 innings.

Bailey settled down until he tired in the 6th. On the night, he allowed 5 runs over 5 1/3 innings, with 8 hits, 3 walks, and 5 strikeouts. Thanks to the run-producing offense, though, he was in line for the win.

Until Nick Masset came in and let the Dodgers tie the game. The ending of the game followed the script for all the other 2010 Reds win, with the team scoring the eventual winning run in their final at bat, this time thanks to a single from Paul Janish.

Still, a win’s a win, and that 2nd inning was quite enjoyable to watch. 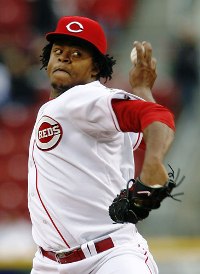 The Daily Brief: A Break from Losing

Last Game
The Reds finished their road trip on Sunday by getting swept by the Pirates. Their losing streak is at 5, but thankfully, they had Monday off. It was nice to go one whole day without a loss and without resisting raging against all the bad decisions Dusty Baker makes. Unfortunately, it was just one day off.

Next Game
Homer Bailey goes for the Reds, hoping to make it past 5 innings. The Dodgers counter with Chad Billingsley. All this goes down at 7:10pm EDT.

Pitching’s Bad, Too
As bad as the Reds offense has been, the supposed strength of the team–the starting pitching–has been bad, too. John Fay wrote about that for the Enquirer. Fay lays down a couple key stats about the recently completed disastrous road trip.

To top it all off, the only good starts have come from Mike Leake. No wonder they’ve lost 5 in a row. We’ll get to see if the pitching can step up to the plate, with or without the offense, today.

What to Say to Sound Smart at the Water Cooler
4 of the Reds last 6 number 1 draft picks on the active roster. Homer Bailey, Jay Bruce, Drew Stubbs, and Mike Leake are all with the big league club, while Devin Mesoraco and Yonder Alonso are working their way through the minors.

Posted in Cincinnati Reds, Daily Briefs, NL Central.
Comments Off on The Daily Brief: A Break from Losing