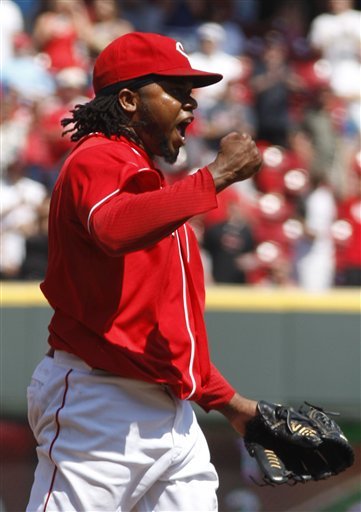 D-Trains search for a W continues

Dontrelle Willis, the high yield bond of starting pitchers, put in another good starting performance tonight, and again was denied the win. Not that the bullpen was terrible–allowing just one run in regulation play to let the Giants tie it up at three and eventually necessitate extras–but unlike in recent nights, that one allowed run was actually a significant percentage of the opponent’s score.

Signed in the off-season to a minor league deal, Dontrelle straightened himself out in Louisville and then joined the Reds for a start on July 10. Tonight was his fourth start since then, and he’s been nothing if not consistent:

Of course, regardless of the pitcher’s performance, the team has to win before the pitcher can win, and the Reds haven’t been doing much of that lately in any event. But there’s always a bright side: if the disappearing act of the offense and/or the lack of support from the bullpen can keep him performing at this level in pursuit of a win, at least Dontrelle might be able to play for a good team next year.

Posted in Random Ramblings.
Comments Off on D-Trains search for a W continues

The Cincinnati Reds were swept by the New York Mets today. It was another ugly game that makes you wonder why the Reds haven’t yet hired a general manager.

Then you remember, they do have one. And you realize, the season’s most likely over. At least, that’s what it feels like.

Walt Jocketty has seemed old and slow this year. Almost a month after he should have, he finally called up Zack Cozart. And then, for no apparent gain this season, he traded away Jonny Gomes. (I’m fine with that trade, but it does nothing to address needs for this or the next season.)

It’s just been frustrating. The team has so much talent, but is under-performing a lot. Manager Dusty Baker certainly has to take some blame. His “stay calm” demeanor worked well last year, but it’s exactly the wrong thing this year. It lead to feeling like he didn’t care when they continued sucking and losing this year.

I gotta say it again, after today’s loss, it feels like the season is over. The Reds are 50-55, with no signs of improvement and no seeming help from the alleged general manager on the way. It’s sad. I’d had hopes of a winning year again this year. I guess there’s always next year?

Posted in Cincinnati Reds, NL Central, Random Ramblings.
Comments Off on Feeling Like the Season is Over

Why else would he describe the trade by the St. Louis Cardinals of promising young power-hitting, speedy outfielder Colby Rasmus like this?

There’s some level of frustration in here because the the rich teams get richer at this time of year.

I was confused by that statement about the trade because the only clear winner is Colby Rasmus. Well, and the public for being shown that the true general manager of the Cardinals is “genius” Tony LaRussa.

ESPN is reporting a complicated trade that’s resulted in, among other things, the addition of Corey Patterson to the St. Louis Cardinals’ roster:

The clear winner in this trade is, of course, Colby Rasmus, who finally gets to escape from under the malevolent thumb of Tony LaRussa.