I Want Thom Brennaman To Win This Contest 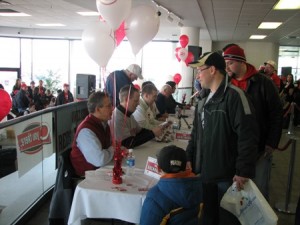 Awful Announcing is running a fun little competition where they’re searching for a new awful announcer’s face to put on their site’s masthead. Up until this point, Joe Morgan had been prominently featured, but now that he’s retired from broadcasting and gone into the business of selling Hondas to Ohioans, they need somebody new.

The first round of 32 has already completed, and I have my personal favorites that I want to see in the finals. Yes, I want to see a fight to the death between the two sons of great baseball announcers who are the opposite of their fathers: Joe Buck versus Thom Brennaman. And Brennaman should win.

Thom beat out some guy named Jon Gruden in the first round. For his next battle, he’ll be going against Jim Gray on Saturday. I know who I’ll be voting for.

Posted in Cincinnati Reds, NL Central, Random Ramblings.
Comments Off on I Want Thom Brennaman To Win This Contest