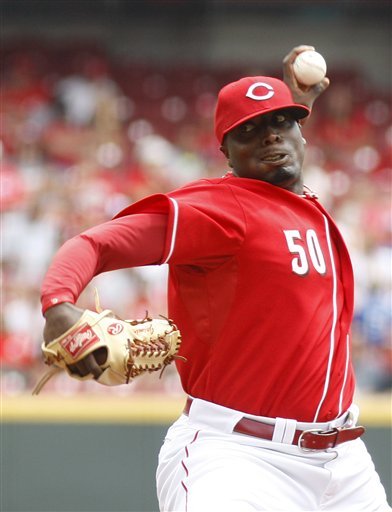 Dontrelle Willis is a low-risk reclamation project that the Reds took a chance on this year. He is also a guy who simply cannot catch a break. He’s done good work with the team so far, but maybe pushed it a little too hard last time out. Understandable: his six-inning outings kept being given away in innings seven through nine. Little wonder he’d want to stick around himself.

But today he had some forearm soreness even before the game, and he couldn’t keep the ball under control by the third inning. He gave up a quick four runs before they pulled him for Sam LeCure, who stopped the bleeding there.

Jay Bruce did knock a three run homer to put the Reds on the board, but it wasn’t enough at the time nor for the rest of the game, since it was never followed up by any more scoring. Speaking of Jay Bruce, the CTS and I have been talking about how he’s been with the team forever but he’s only 24. Same thing for Homer Bailey, who is only 25 but has been in the Reds’ collective consciousness since, roughly, 1994. These two, and other guys like them, keep developing and hit their awesomeness in a couple years, and this team could really be something to watch.

Posted in Random Ramblings.
Comments Off on Injury further derails the D-Train