The Cincinnati Reds’ win tonight over the Washington Nationals brought their record to 66-66, making them a .500 team for the first time since the beginning of July. At just 2.5 games back on the second place St. Louis Cardinals, the Reds are the team in the division with the most hope of overtaking the team in front of them. 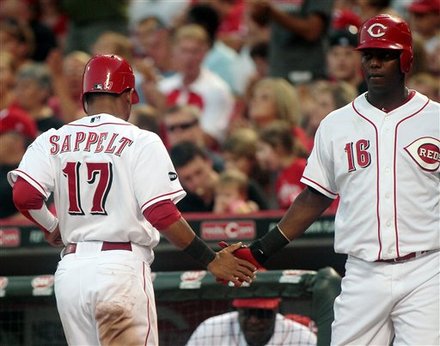 At least, not with regards to Cincinnati. But I’m perfectly willing to talk about how the Houston Astros have been eliminated from postseason contention for about a week now, and the Chicago Cubs have a magic number of just 7, making it difficult but not impossible for them to be eliminated from winning the NLC before September. Hurricane Irene may save them the distinction of being eliminated from the wild card in that time frame.

Here in Indy, the minor league season has almost wrapped up, and the populous is making the transition to football. Myself, I want to cling to baseball for as long as I can, lest another summer slip away too fast. No need for another season to slip away too fast.

Game 132: Offense, Defense, and Pitching Combine for Return to .500

Mike Leake started the game for the Cincinnati Reds in their first attempt to return their record to .500 in longer than I can remember. It was his 3rd attempt for his 11th win, and things didn’t look promising when he walked the first batter.

However, he settled down. Leake allowed no runs in that first inning, and with the exception of 2 runs in the 3rd, the rest of his 6 innings were scoreless. He pitched 6 innings, allowed 2 runs, and left with his team having a 5-2 lead.

That lead was spread around the whole team, with Brandon Phillips driving in one run and scoring 2 more, and Miguel Cairo driving in one and scoring one. Drew Stubbs also went 3-3 and drove in a run. The other runs were driven in by Dave Sappelt and Edgar Renteria.

If this had been Dontrelle Willis starting, you know the bullpen would’ve coughed up that lead. But there were no blown saves tonight. It was the most complete, well put-together win I’ve seen the Reds have in a while. After Leake was pulled, Sam LeCure and Bill Bray held the lead for Francisco Cordero, who had a perfect 9th for the save.

Posted in Cincinnati Reds, Game Wrap, NL Central.
Comments Off on Game 132: Offense, Defense, and Pitching Combine for Return to .500