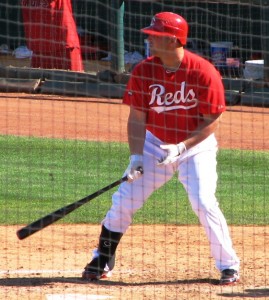 I’ve been hard on Cincinnati Reds’ General Manager Walt Jocketty for his lack of doing anything other than sitting on his thumbs during the 2011 season. Perhaps the best example of this was how he did nothing with soon-to-leave catcher Ramon Hernandez before the trade deadline.

Everyone knew Devin Mesoraco was the catcher of the future, and Ryan Hanigan would be a more-than-capable backup. This left Hernandez, a free agent at the end of the year, the odd man out. So of course, Jocketty twiddled his thumbs and let the deadline pass, apparently happy with the Reds’ mediocre march to 3rd place.

Well, Hernandez, as expected, is no longer a Red. He signed a two-year deal with the Colorado Rockies today. I wish him well. He did better than I ever expected him to when the Reds traded Ryan Freel for him 3 years ago.

Jocketty’s failure wasn’t a complete loss. Thanks to the new collective bargaining agreement, the loss of Hernandez will get the Reds a supplemental first round draft pick in the 2012 draft. And once that player’s ready for the majors in 3-4 years, I’m sure he’ll come in very handy for the stretch run of 2011.

The fresh-faced hope and naivete of the 2012 season officially kicks off tomorrow as Redsfest rolls into the Cincinnati Duke Energy Convention Center. Honestly, this event is so great that it outshines the season itself. At least in August.

Hopefully you can make it in person, because it really is a good time, but if you can’t, we’ll be posting all manner of cell phone photos here on RHM. Here’s a press release about the whole thing.

Tickets are available now for the Cincinnati Reds fan festival to be held Dec. 2-3 at Duke Energy Convention Center

CINCINNATI, OHIO – FOX Sports Ohio is proud to be the title sponsor of this year’s Redsfest, the Cincinnati Reds’ an offseason event featuring fan interaction with current and former Reds players, interactive games for kids of all ages, hard-to-find memorabilia and much more! It will be held at the Duke Energy Convention Center in downtown Cincinnati on this Friday, December 2 from 4pm to 10:30pm and Saturday, December 3 from 11am to 6:30pm. Proceeds from the event benefit the Reds Community Fund.

As the TV home of the Cincinnati Reds and title sponsor of Redsfest, FOX Sports Ohio will have a tent at the event, offering fans the opportunity to play games, win prizes, and participate in a variety of activities. All fans who visit the FOX Sports Ohio tent will have the chance to register to win an autographed Jay Bruce mini helmet.

On Friday, FOX Sports Ohio will be shooting footage of the event, and fans will have the chance to share their favorite Reds memories on camera for possible on-air inclusion next season. On Saturday, Reds broadcasters Jim Day and Jeff Piecoro will stop by the tent throughout the event to sign autographs.

In addition to FOX Sports Ohio’s presence, the Cincinnati Reds have many other activities at Redsfest. Fans will have access to autograph and photo booths featuring current and former Reds players, interactive games, hard-to-find memorabilia and more. More than 70 current and former Reds players, coaches and broadcasters are scheduled to appear, and over 100 player autograph sessions and player photograph sessions are free of charge with a Redsfest general admission ticket. All current and former players in attendance will be introduced live on the main stage on Dec. 3 at 5:30pm.

With paid admission, all fans will receive a free View Level ticket for any Monday, Tuesday or Wednesday Reds home game in April 2012, subject to availability. Also, the first 10,000 fans each day will receive a free drawstring backpack and Reds knit gloves.

Tickets are on sale now at reds.com, by phone at (513) 381- REDS, at the Great American Ball Park box office and at Ticketmaster Outlets including select Kroger stores. Tickets will be available at the door starting Friday at 2pm and Saturday at 9am. Proceeds from Redsfest benefit the baseball-themed outreach programs of the Reds Community Fund.

For more detailed information about the two-day event, visit www.reds.com/redsfest.