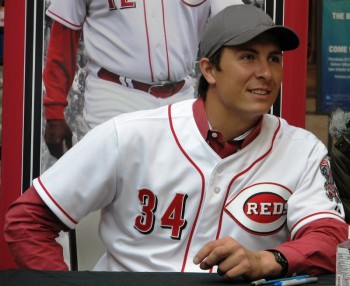 The Cincinnati Reds and Homer Bailey have avoided arbitration. The two have reached agreement on a one-year contract. The amount isn’t available yet, but Bailey asked for $5.8 million, while the Reds offered $4.75 million. It’s likely somewhere between there.

Reds general manager Walt Jocketty said it was toughest year he’s ever had as far as arbitration.

“Absolutely,” he said. “With the numbers of cases and quality of players. We came very close to going to the hearing with (Mat) Latos. We’re all very happy to have it behind us.”

That ends the Reds dealings with arbitration for the year. They managed to sign all of their players before a hearing was required. That’s good, because no employee responds well to hearing their employer tell people how much they suck.

Even though Bailey’s deal was for one year, the Reds will be pursuing a multi-year contract at some point in the future.

Choo reports to camp with posse of 25 journalists

Shin-Soo Choo, the Reds biggest off-season acquisition, reported to camp yesterday and was tailed by 25 members of the South Korean media.

They followed his every move — from the batting cages for early work to outfield practice to batting practice on the field. Most of the contingent will spend five days in Goodyear. During the season, however, only one reporter follows Choo.

Only one during the season? That’s good. I mean, unless Rob Butcher knows how to read and speak South Korean, he’d never be able to determine how easy the South Koreans were to control.

Posted in Cincinnati Reds, NL Central, Spring Training.
Comments Off on Choo reports to camp with posse of 25 journalists