Remembering punching the Cubs in the gut 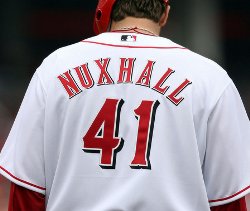 Not so much “remembering” actually, as this particular gut punch of the Cubs occurred in 1958. More like, “honoring.” It was 20,000 days ago today.

Of course, since the game was being played in Chicago, there was still the bottom of the inning to go, and the Reds had gone through some machinations to get their lead. The defense was a shambles:

Still, the Cubs had one thing going for them. By using three pinch hitters and a pinch runner in a game where he’d already used a double switch and gone through part of his bench, Reds manager Birdie Tebbetts was unable to fill the defensive positions competently.

Exactly half of the position players found themselves in places they’d never fielded before. Three of them were in the infield—outfielders Whisenant and Robinson were at second and third respectively, while third baseman Don Hoak shifted to short. Meanwhile, veteran first baseman Dee Fondy stationed himself in left. Only two players were in the same places on the diamond from before the rally—first baseman George Crowe and center fielder Gus Bell.

Heh. I’d like to see Dusty Baker try something like that sometime. Jay Bruce is willing to move to center, but how would he feel about third?

You should check out the whole story on The Hardball Times. It’s like baseball-water in a baseball-drought stricken world.

Posted in Random Ramblings.
Comments Off on Remembering punching the Cubs in the gut