Latos finds his base 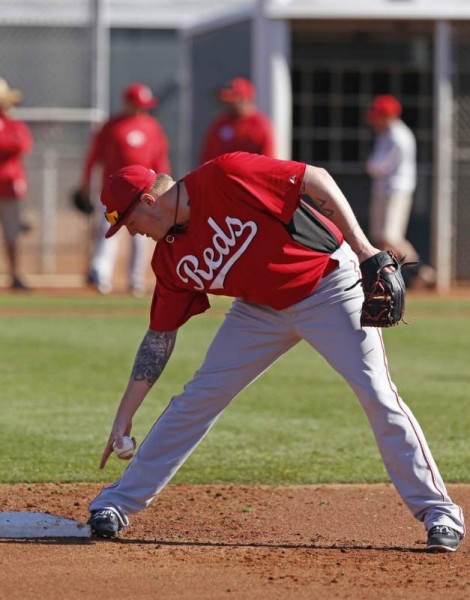 The base had no desire to pull Mat Latos’ finger.

The Cincinnati Reds play their first exhibition game of the 2013 Spring Training season today at 3:05pm when they face the Cleveland Indians. The starter? Tony Cingrani.

Cingrani, the 23-year-old left-hander, was the Reds’ best pitcher in the minors last year. He went 10-4 with a 1.73 ERA at Single-A Bakersfield and Double-A Pensacola.

Because of the World Baseball Classic, Spring Training is one week longer this year. That means more games, and instead of having the projected starters pitch from the very beginning–and potentially be tired come the start of the season–the Reds are planning on waiting a while. For example, expected opening day starter Johnny Cueto won’t make an appearance until the 6th game.

“What we’d like to do as much as possible is not to have these guys have an increase in their workload because of the extra week,” pitching coach Bryan Price said. “Typically most of our starting pitchers are starting a little bit later in spring training.

I have mixed feelings about the World Baseball Classic. I like the idea of getting more countries involved in playing baseball. It’s especially important now that baseball is no longer in the Olympics. However, the timing feels a little off. Still, I can’t be too upset if it means baseball starts a little earlier this year.