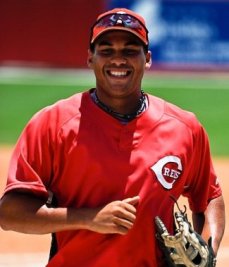 In brief: 2 games and 1 chat opportunity

Last Game
The Reds were off yesterday, leaving Reds fans everywhere with very little to worry relentlessly about. Just kidding, there’s plenty of stuff to worry about.

Next Game
As if to make up for yesterday, the Reds are doing double-duty today. Half the team will be stay home to host the Cubs. Tony Cingrani will start for the Reds.

Meanwhile, the rest will be head to Camelback Ranch to take on the Dodgers. Bronson Arroyo will be the one to start that game. Both games begin at 9:05 p.m. ET. 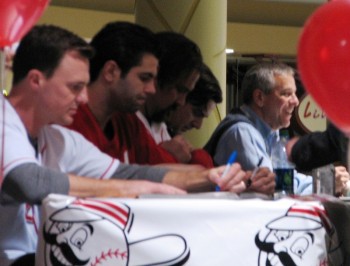 Your chance to sock it to Phil Castellini
I got this email from the Reds this morning, and thought you might like to know about your chance to talk baseball operations. It’s perfect for all you baseball fan MBAs out there!

Reds Chief Operating Officer Phil Castellini will be chatting LIVE with fans today at 3 p.m. ET at reds.com. Fans will have the chance to talk with Phil about some of the club’s new business initiatives for 2013, including improvements to the ballpark, dynamic pricing on tickets and much more.

Fans can login to the chat starting at noon ET on reds.com and begin submitting their questions. To participate in the chat, fans will need an MLB.com account.

Click here for more information and to take part in today’s chat!

What to Say to Sound Smart at the Water Cooler
According to Doc’s Sports Network, Vegas favors the Reds to win the NLC, giving them 5/7 odds.

Posted in Daily Briefs.
Comments Off on In brief: 2 games and 1 chat opportunity