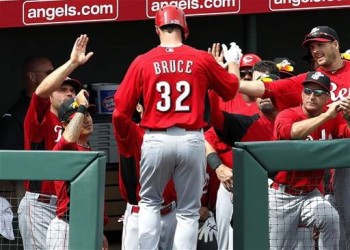 Bruce had two home runs yesterday. Get used to photos like this. (AP Photo/Matt York)

Last Game
Despite leading early, the Reds kept their losing streak alive yesterday when they lost to the Angels 4-6. The starting pitching was pretty good, the youngster they gave the ball to in the seventh wasn’t, and Jay Bruce hit 2 solo shots.

Next Game
Tonight the Reds play an exhibition game (as if they aren’t all exhibition games) against the World Baseball Classic team from Canada. Both teams number Joey Votto on their rosters, so of course, he won’t be playing at all tonight.

Bruce is apparently hot, though, and Mat Latos is starting, so it still ought to be a game. First pitch at 9:05 p.m.

Every game is equally important; some are just more important than others
There is no mention of tonight’s game on the home page of Reds.com except for the fifth story in the carousel. That puts it behind a story about the battle for the fifth rotation spot, an ad for MLBtv premium, a story that calls Todd Frazier a “new face,” and an ad for single-game tickets. Sort of gives you an idea of how this game ranks, priority wise.

What to Say to Sound Smart at the Water Cooler
Pittsburgh’s Russell Martin was supposed to be the starting catcher for Team Canada, but he backed out to keep from using up all his catching ability before the season even starts. He still wanted to play, though, and his idea was to play shortstop instead. It sounds like a ridiculous idea, but he does have 15 whole games at 3B in his career, which is almost the same thing.

Posted in Daily Briefs.
Comments Off on In Brief: Reds take on Team Canada 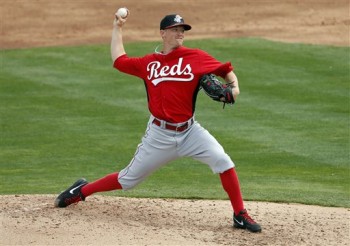